This Glaswegian band are destined for big things. 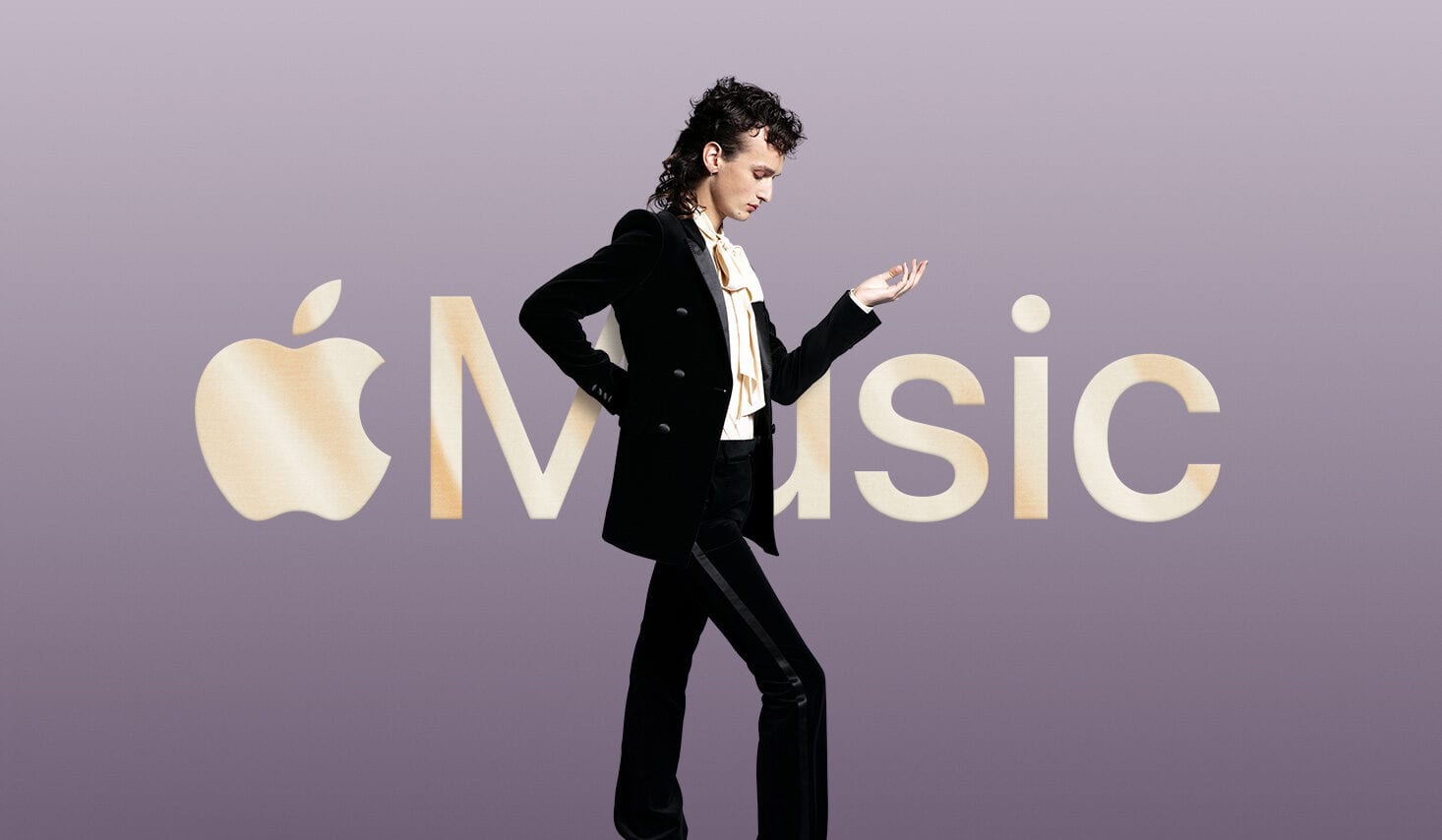 Their beginnings play out like a coming of age movie. They became friends at Glasgow University during Freshers Week, then later decided to form a band, entered a Battle of the Bands competition and won. From there they realised this whole being-in-a-band business could have something about it. Before they know it they’ve played Glasgow’s iconic King Tuts venue seven times and plans to tour internationally have become a reality. A string of well-received singles later, bandmates James, Lewis, Finlay, Calum and Dave are in prime position to give the British music scene a much-needed shake-up.

If you’ve listened to a Walt Disco track, the references are clear. It’s 80s New Romantics melodrama reimagined for a new generation. They’ve spoken on numerous occasions about being influenced by 80s Scottish post-punk. The Associates, Simple Minds and Orange Juice quickly get mentioned. What I want to know is, are there influences that are not so clearly apparent? “Musically, stuff like Ella Fitzgerald and Billie Holiday with their melodies and chords,” says James Potter, who has renamed himself James Power Bottom for this Zoom call. “That romanticism and dreaminess that you get from those artists is unparalleled. We’re always striving for stuff like that. That might be a surprise influence that people don’t hear at first in our music, but I listen to their stuff all the time.”

I mention that there’s such a rich texture in both Ella Fitzgerald and Billie Holiday’s music that it encapsulates the listener and places them firmly in their world – something that Walt Disco manages to do very well with their own material. “I think that is important in not just music, but with films and theatre,” James adds. “If the art is so powerful that you can put yourself in that place, then that art is strong.”
James began writing songs when he was 16 and found himself getting frustrated that he couldn’t reach certain notes. He sought himself a vocal coach, a queer man named Bryan whose favourite singers were the likes of Freddie Mercury and David Bowie. Bryan was a trained opera singer but wanted to be a pop singer, and within a few lessons he helped James discover his distinctive, theatrical vocal style. “I was like, ‘Fuck, I’ve got this voice I like the sound of’,” says James. “Then I discovered I liked being in the band and doing music. I knew I always loved music, but singing came right at the end of school.” Tim Curry from The Rocky Horror Picture Show was also a huge influence on James’s singing style, and would soon serve to inspire one of their most anthemic songs. 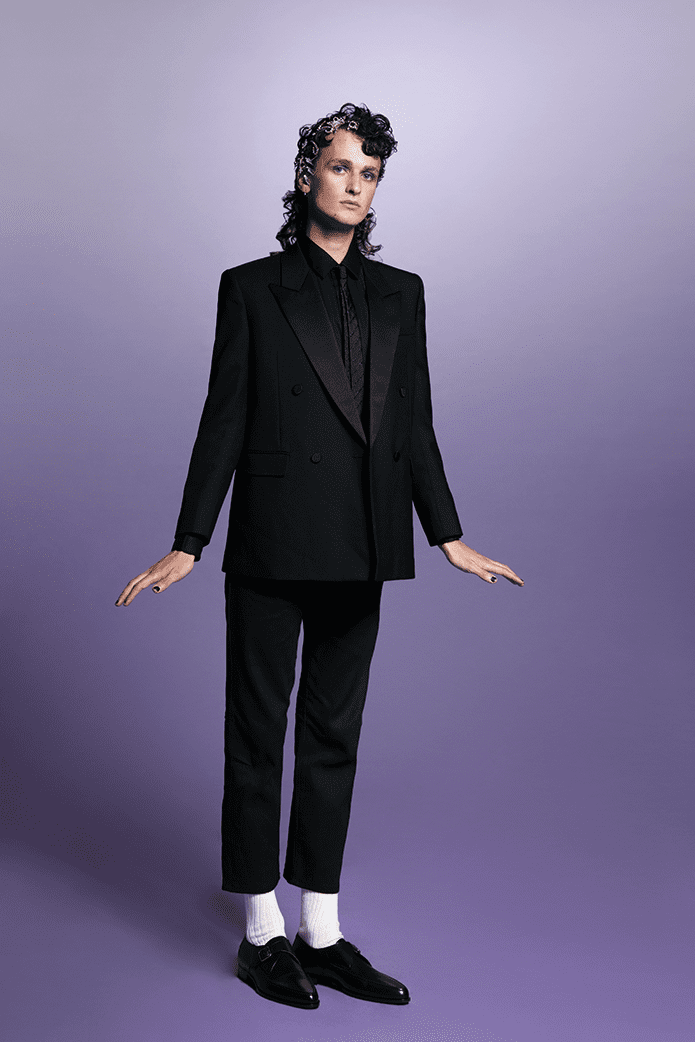 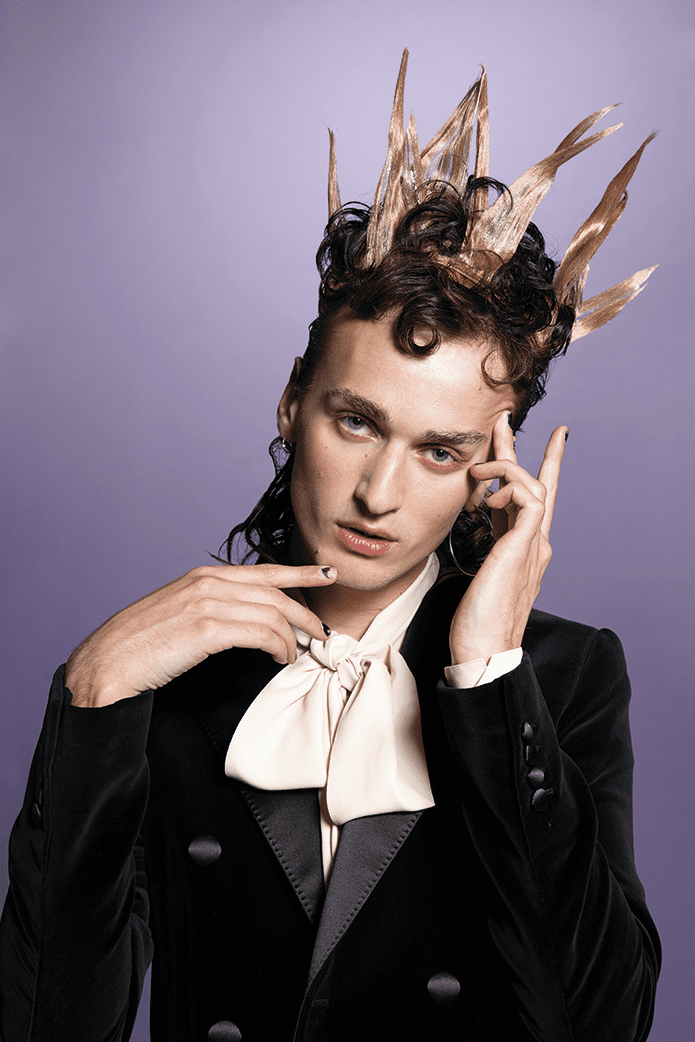 When I speak to James, it’s days after Walt Disco’s latest single Hey Boy (You’re One Of Us) was released. The singer is quick to tell me that The Rocky Horror Picture Show was the main inspiration behind the track. “We thought ‘Let’s write the song like we’re teaching someone who wants to be in touch with their feminine side and dress in corsets and stuff’,” he tells me. “Because we all do stuff like that, we thought we’d show you. It’s fun and kinky, and it’s important in the bedroom and day-to-day life to learn how to be in touch with your feminine side, while not discounting the parts that are masculine.” If COVID-19 hadn’t reared its ugly head this year, we guarantee it would have been a song huge crowds would have been chanting out in festival fields this past summer. I tell James that the last time I heard a playful, queer, anthemic crowd-pleaser on this scale would have been any of the Scissor Sisters’ hits back in the day. His face immediately lights up. “That’s a nice compliment, thank you,” he says. So surely Scissor Sisters must have also played a part in James’s musical education to this point? “Oh, so much! The first few albums, my parents played the CD all the time,” he says. “It had that glamour – as my father was into rock music when I was a kid – but this had fun melodies and messages. My parents didn’t know I was queer, I didn’t know I was queer, but we all liked listening to it.”

While James acknowledges that, sonically, there are all these Scottish influences from the 80s in their music, they look towards the Scissor Sisters when it comes to live show performance and presence. He credits their balance of being a band with live instrumentation but also evoking the sense of a pop concert spectacle – something Walt Disco are achieving during their own headline shows. When James walks on set for his ELEVATE shoot, his temperament is calm and collected. His perfectly manicured nails poke out the sleeves of his oversized hoodie, and when we show him our table of hair accessories, jewelry and make-up options, his eyes widen. When it comes to making a fashion statement, pushing boundaries and going beyond what is expected of a guitar band, like the Scissor Sisters before him, James is more than eager to take risks and have fun.

Expressing his identity through fashion came shortly after he first began writing music. “I think it was maybe when I turned 17/18,” he recalls. It was discovering Vivienne Westwood and the punk scene that fuelled his imagination. “Gradually from being in the band, I built up the confidence to try all these things, and I feel a lot better with my gender non-conforming self and my sexuality.” Considering he was swooped up to be a part of Celine’s spring/summer 2019 campaign, we’d say it’s working out pretty well for him so far.

I built up the confidence to try all these things, and I feel a lot better with my gender non-conforming self and my sexuality.

When it comes to Walt Disco, there’s no denying they are highly stylised – both musically and visually – but that doesn’t mean they take themselves too seriously. In fact, it’s their keen sense of humour that runs throughout their work that makes them so appealing. How many singers in a band do you know who would log on to a Zoom call with a magazine editor with the screen name James Power Bottom? Another example crops up when we start to talk about their forthcoming new EP, Young Hard and Handsome and just where the inspiration for that title came from. The story begins in a “weird-thing” shop in London, where James claims they have “pickled heads” on display. Naturally, his wandering eyes landed elsewhere in the store. “It had a gay porn section full of vintage gay porn books,” he smiles. “I picked up this short story book called Young, Hard and Handsome. It was just a cool phrase and we used it everywhere and we were constantly saying it. Then it became a lyric in Cut Your Hair, and at that point, we were like ‘Can this EP be called anything else? Probably not.’ We’ll now have to think of a new one for the album campaign, though.”

Young Hard and Handsome will feature recent single Cut Your Hair and Hey Boy (You’re One Of Us) along with two new tracks. There’s a song called I’m What You Want which essentially shows you what happens when you write a standard band song, but then pitch up the vocals PC Music-style and take it to a ridiculous level. “There’s a Korean robot doing a poem during the guitar solo,” James adds. It sounds brilliantly bonkers and exactly what we want to hear guitar bands doing in 2020. But it’s the final track Heather that really gets us excited. James describes the track as being “really pop” and cites ABBA and Girls Aloud as being the main references. “It talks about me not understanding my own gender, and finding dating people really difficult as I never told them how I really felt,” James says. “I only discovered this in the past year. I didn’t want to make it a sad song, but a whirling one – and it’s got really poppy elements.” It sounds like it has all the ingredients to be the perfect queer anthem.

It’s incredibly refreshing to see a music act like Walt Disco being celebrated and coming up through the ranks. ELEVATE is a campaign created by GAY TIMES in collaboration with Apple Music to support and platform emerging LGBTQ+ talent as they break through into the mainstream, so to have this exhilarating Scottish band as part of the initiative shows us just how much emerging queer talent is flourishing at the moment. When I raise this point, James both agrees and disagrees that there’s more LGBTQ+ talent coming through than ever before. While he acknowledges that there’s plenty of representation in the pop and alt-electronic scene, he’s rarely seen himself in the frontpeople of bands that have dominated music in recent years. 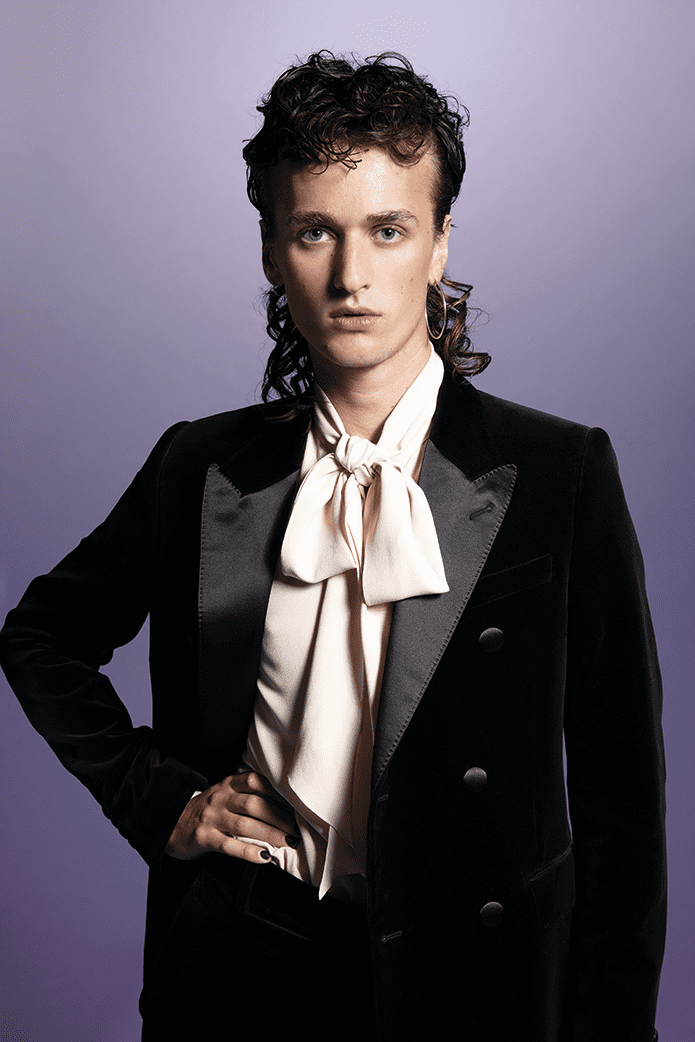 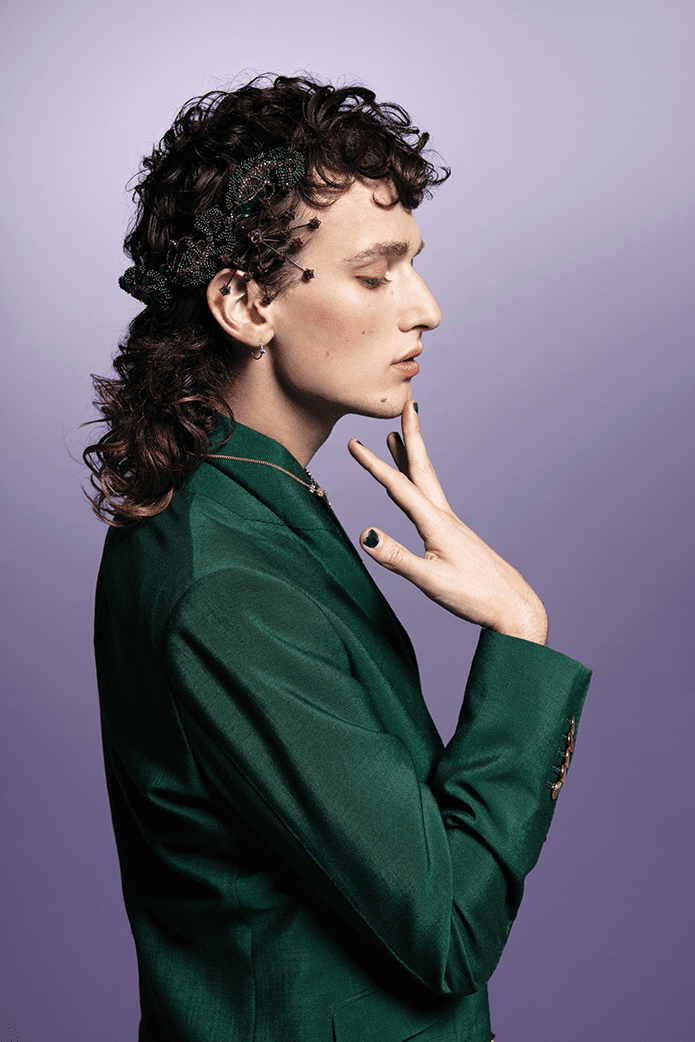 It’s true. While some of the most iconic rock stars of all-time – from Freddie Mercury, Prince and David Bowie – challenged traditional ideas of masculinity and sexuality, we’ve barely seen a star in that corner of music do something similar since. The decade Walt Disco draw inspiration from felt electric and progressive, with queer 80s icons like Culture Club, Frankie Goes To Hollywood and Bronski Beat ruling the charts. But as the 90s came in, lad-rock and Brit-pop put all of that to rest. I ask James why he thinks that was. “I have no idea, but it was probably deep-rooted homophobia in society,” he says. “In the 90s, they moved to smaller production and grungier tones and less snares that were associated with Bowie, Prince, Madonna or Kylie records. So maybe these hyper-masculine men thought that if snares sounded like that, then it was gay. It’s really fucked up, because you thought society was going forward – and it was in some ways – but it stepped backwards by 20-30 years. So when bands and artists are doing it now, it’s more important than ever. It needs to go further and become normal.”

It goes without saying that with the peak of the HIV/AIDS crisis and the scaremongering that came with it, as well as Margaret Thatcher’s toxic Section 28 prohibiting local authorities from “promoting the teaching in any maintained school of the acceptability of homosexuality as a pretended family relationship,” queer people in the 90s were widely thought of as less-than. While as a society we still have a way to go, we have also come so far. James points out that his home country of Scotland is the first in the world to add LGBTQ+ education to the national syllabus. “It would’ve meant so much to me, and everyone who was queer in school would’ve had a much better time,” James says when I ask how he’d have felt had that been the case when he was in school. “You would’ve learned how to come to terms with your sexuality and gender so much earlier. I don’t know what it was like at your school, but although I wasn’t at a rough school, people didn’t come out until they left. People got bullied for being LGBTQ+. We even had a gay teacher who held an assembly for every issue under the book, apart from homophobic bullying. I was miffed when I left, but I’ve had friends go to that school and they say it’s getting better and people are out.”

Progress is happening and Walt Disco can live safe in the knowledge that they are part of that change. There hasn’t been a queer band like them for quite some time, which is precisely why they are destined for big things. There are plenty of young queer kids out there that, just like James, need to see themselves represented. Walt Disco can be that beacon of light and have plenty of fun doing it. 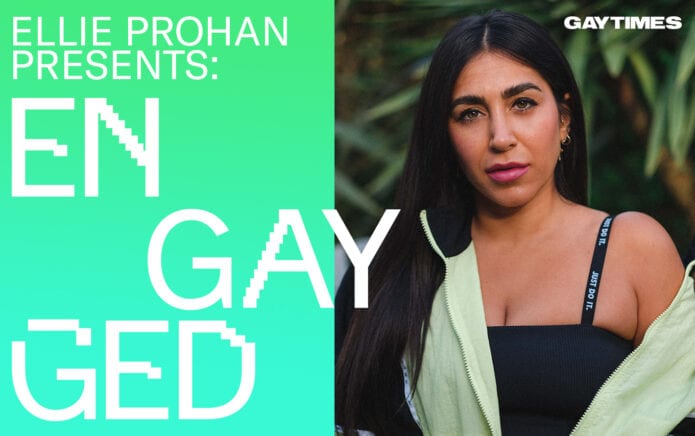 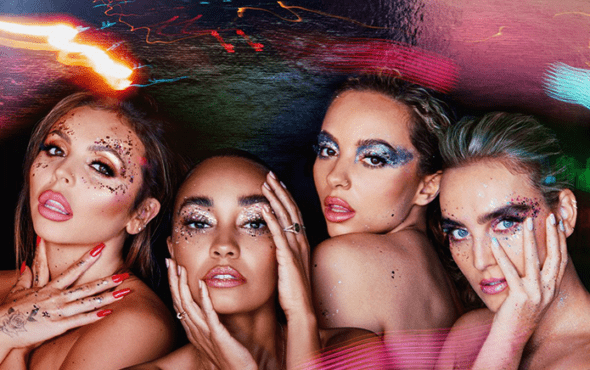 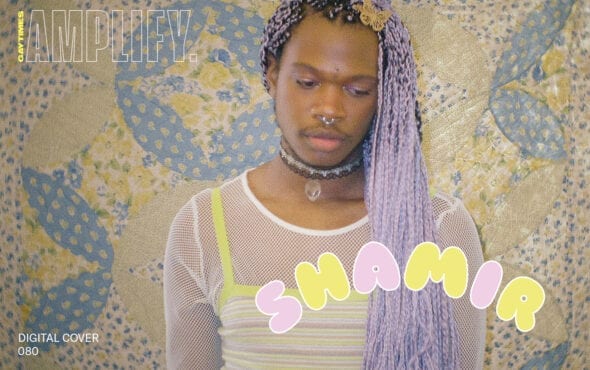 Shamir on bringing his divided fanbase together with his new album