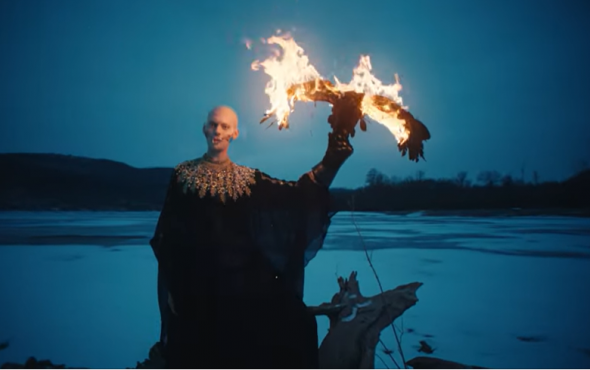 The video has a post-apocalyptic feel with a genderless alien as a cult leader.

Radical queer rock group, UNI, comprised of Charlotte Kemp Muhl, Jack James and David Strange, have released the music video for their latest song, Debris, and given the current world circumstances, it’s a perfect video for the times.

The post-apocalyptic video comes with everything from a burning hawk, to a Christian cross, to a Mad Max-esque cult led by a genderless alien, complete with toxic waste symbols.

The music video, which was premiered with Nylon, even attracted the attention of Yoko Ono, who tweeted out a snippet.

On the video, Charlotte, who directed it, as well as writing and producing the song, explained: “Debris is about a post apocalyptic cult, embracing the manifesto of ‘Mutate or Die’, and using the metaphor of the end of the world for the end of a relationship.

“Right after we filmed it, there were pandemics and riots, so it felt eerily premonitory of the despair and destruction of western civilization getting its comeuppance, but also about the phoenix of a better future rising from the ashes.

“My main inspirations for directing it were Man Who Fell To Earth, Nam June Paik, and Mandy. Jack plays the genderless alien cult leader. David is the warrior, and I was inspired by the mysterious and ominous presence of Kim Jong Un’s sister and royal advisor for my role, who is one of those rare, ice cold women running a militaristic state.”

You can watch the video here, or below.

When asked by Nylon what gives them hope at the moment, James, who identifies as LGBTQ+ said: “Sugar cereal, Tennessee Williams/Trent Reznor fan fiction (surprisingly hot), and brushing up on Hildegard of Bingen’s second volume of visionary theology: Liber Vitae Meritorum; it’s a riot!

“That being said, I still feel hopeful. This is because of the courage and compassion I’ve witnessed from human-kind in this time. Sure, there are so many things to learn about empathy, privilege and tribalism.

“However, it is the willingness to learn and evolve that inspires me to believe we’ll come out the other side of the Second American Revolution- shifting the pendulum from a society based in fear to a society based in love. Fingers crossed, right?”