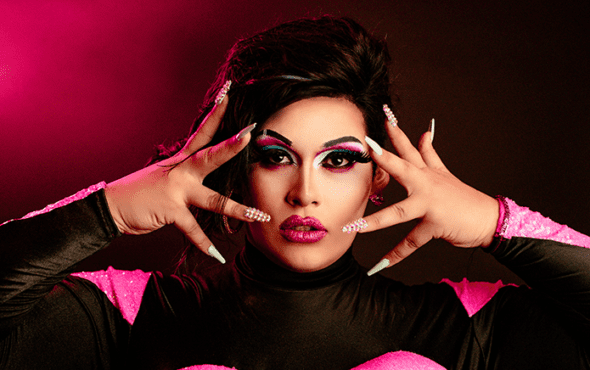 Salina EsTitties has no f***s to give in her new video for her single STFU Karen and we are obsessed.

The visual opens up with LA-based drag queen Lelani Lopez starring as the first Karen, a privileged and entitled woman who creates a scene at the front door of a business.

After this hilarious and eerie scene, the video takes off with Salina serving looks, attitude, and fierce choreography throughout the whole video.

EsTitties opened up about the inspiration and message of the visual, saying: “The inspiration for this video came about after watching yet another video of a white privileged bigot verbally attacking another person of colour.”

She continued: “Being in LA I’ve been able to attend many protests and let me tell you, every single protest I’ve been too I’ve had an altercation with a KAREN! Every time! A Karen video popped up on my feed and I thought to myself, “STFU KAREN”.” “This truly has been one of my biggest projects to date, featuring TikTok trends in the song and video, social/political undertones, and over campy silly scenes,” she says.

“This video is everything I could have ever wished to create as my first single and first real dive into putting something out there that’s 100% SALINA ESTITTIES.”

Watch the full video for STFU Karen below and listen to the track here.

Related: Salina EsTitties on the “social politics” of not being a Drag Race queen.