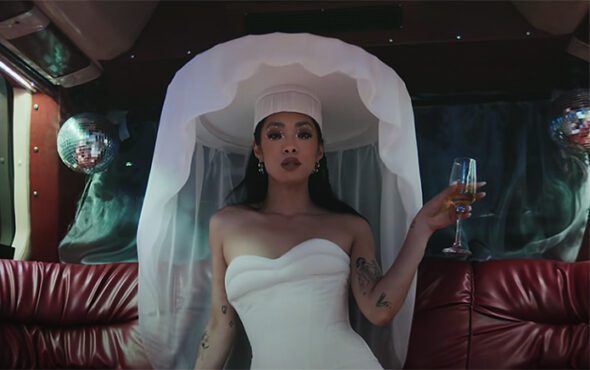 Back in May, the Beg For You singer surprised fans when she announced the lead single from her forthcoming sophomore album, Hold The Girl.

Described as the start to her “new era” of music, the dazzling track is full of pop culture references, quick-witted lyrics and of course, breathtaking vocals from Rina.

“I wanted to write a western pop song that celebrated COMMUNITY and LOVE in a time where the world seemed hellish. This Hell is better with you,” she wrote via Instagram.

On 15 June, the talented singer-songwriter finally released the accompanying music video for the record, and it is everything.

At the start of the visual, a woman confidently struts into a hotel with a bagged wedding dress. The scene then shifts to Rina putting on the white ensemble before she says the iconic Shania Twain-inspired line, “Let’s go, girls.”

The video then transitions to the Bad Friend singer dolled up in a campy limousine as she makes her way to her queer wedding. Unfortunatly, along the way, she drives past anti-LGBTQ+ protesters who end up crashing the happy day.

But even with the pushback, Rina reigns supreme as she kicks out the protesters and performs an intricate routine down the aisle towards her partners.

As the video continues, Rina and her guests head to the wedding afterparty, aptly named “This Hell Club.”

During the fun and chaotic evening, the entire wedding party participate in a good-ole fashion square dance and eat a fiery red wedding cake.

At the end of the video, Rina welcomes more people into the “This Hell Club” before changing into a dazzling silver-denim costume.

In a statement, the BRIT nominated artist opened up about filming the electric music video with her long-time director Ali Kurr.

“It was amazing to get back together with director Ali Kurr (‘XS’, ‘Bad Friend’) for the video for ‘This Hell.’ We always like to tell engaging stories through film together, so this one was about love and community in the face of hatred and dissent,” she said.

Rina’s This Hell music video comes a few weeks after she revealed the release date for her second studio album, Hold The Girl.

The forthcoming record, which is set to drop on 2 September, is expected to include the fan-favourite track Catch Me In The Air, which has been performed on Rina’s Dynasty Tour.

Watch the fierce new music video for This Hell here or below.