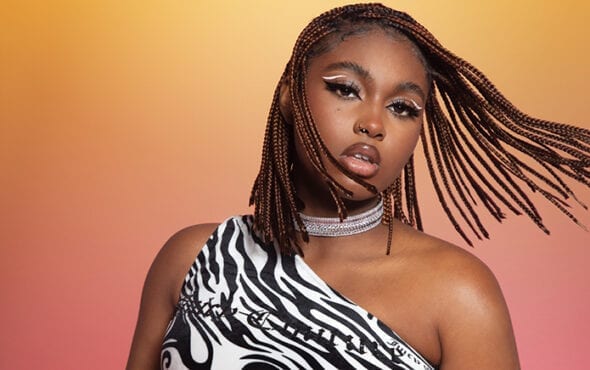 Tiana Major9 has collaborated with six different artists for a remixed edition of her debut EP At Sixes And Sevens.

The rising British singer-songwriter has released new versions of five of the tracks that appeared on the original EP, as well as including her latest single On Read with Lucky Daye on this new collection.

At Sixes And Sevens Remixed features her stunning reworks of Same Space? with added vocal from SiR, Think About You (Lovers Mix) with Haile, and a (Notion Mix) featuring Beam, as well as …Exclusively (Remix) with Jvck James.

A remixed version of Real Affair has also been added, that features vocals from Vince Staples.

At Sixes And Sevens hears Tiana Major9 wax lyrical about finding matters of the heart confusing at times, but in a recent interview with GAY TIMES she said that writing this music helped her understand herself more.

“I think it definitely helped me find clarity,” she told us. “I feel like I understand my emotions better.

“I feel like musically, with this EP I wanted to give people a taste of loads of different things I could do. So when it comes to my debut album they are not shocked!”

It’s been a tremendous 12 months for Tiana Major9. As well as receiving praise for her debut EP, she was also nominated for a Grammy Award for her song Collide.

This all came after she signed a major label deal with the legendary Motown Records, joining one of the world’s most iconic musical legacies.

“My team, I feel like they get me and they understand me,” she said about settling in at the label. “It feels like everyone was really all-in on trying to make my music as big as they feel like it deserves to be.

“I just have great people around me. People that push me and motivate me and encourage me. To be from the UK to and flying the flag for us here, it’s lit!”

More recently we named Tiana Major9 as the tenth artist as part of our industry-leading ELEVATE campaign.

Listen to the GAY TIMES Queer & Now playlist on Apple Music below: