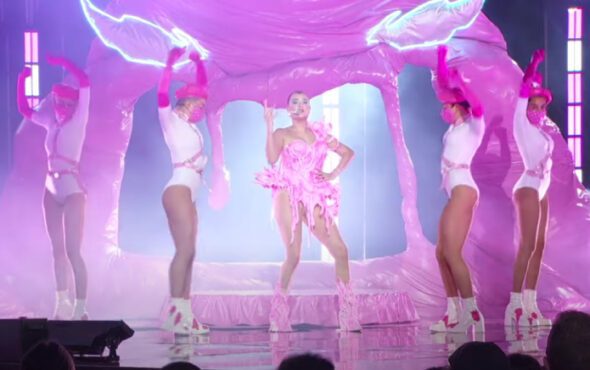 The German singer-songwriter took to the stage on 12 September in a historic performance of her brand new single.

Kim made an iconic entrance to the event, arriving in a baby pink convertible with good friend Paris Hilton.

The Icy singer wore a black vinyl bodysuit with an embroidered mini-dress over it before taking to the stage in a pink ensemble that left fans gagged.

She becomes the first transgender performer at the VMAs, with other trans trailblazers such as Laverne Cox making an appearance at the ceremony in 2014.

In 2015, Miley Cyrus took the stage with drag queens, actors, burlesque performers and trans activists in a legendary performance of her track Dooo It!

Kim makes history as she is the first transgender entertainer to take the stage in a headline performance of this kind.

In August 2021, the singer signed with Republic Records, saying: “Thanks for believing [in] me Republic, I feel so supported and have no idea how I did it before you.”