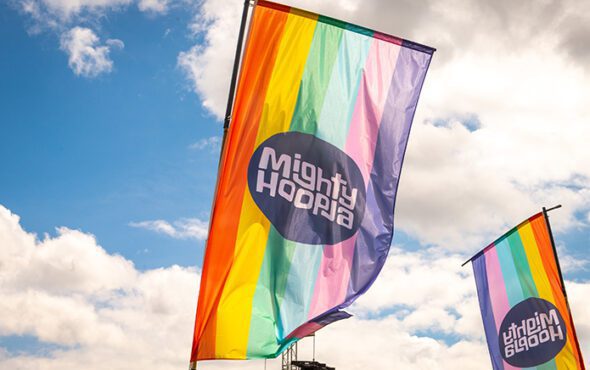 Mighty Hoopla will be back, back, back again next summer and is set to feature one of its fiercest lineups to date.

In a prior announcement, it was confirmed that the original Sugababes trio will be reuniting for a headline show on Saturday 4 June.

On 6 December, Mighty Hoopla confirmed that the day’s special guest will be Jessie Ware, who is currently touring her critically acclaimed record What’s Your Pleasure? alongside legendary DJ, Jodie Harsh.

Attendees can also expect to see Agnes Cleopatra, Eve Five Star, Kim Wilde, Louise Redknapp, Self Esteem and Sink the Pink the 411 take the stage on the day.

For the first time, the event will take place across two days with 50,000 festival-goers expected to be in attendance – meaning a second full day of performers.

Steps will perform as Friday 3 June’s headline act in the wake of their seventh studio album, What the Future Holds Pt. 2, being released this year.

Left Outside Alone hitmaker Anastacia will serve as Friday’s special guest in what is sure to be one of Mighty Hoopla’s most legendary sets to date.

Cascada will be performing hits from their endless stream of bops, with the likes of Big Freedia, Foxes and Jamelia rounding out the lineup.

Also making guest appearances across the weekend will be Charity Shop Sue’s 2nd Hand Banger, Guilty Pleasures, The Bitten Peach, Crayola the Queen and many, many more.

The fun doesn’t end there, though, as Mighty Hoopla said an array of acts are yet to be announced.

Tickets for the festival are still available and range in price from £40 for a pre-2pm arrival to £297.50 for a “groupla ticket” – six general admissions for the price of five!

General admission earlybird tickets have been sold out for some time, so act quickly if you want to guarantee your spot.

Mighty Hoopla will take place in Brockwell Park on 3 and 4 June 2022.

More information on tickets and the festival’s full lineup can be found by clicking here.