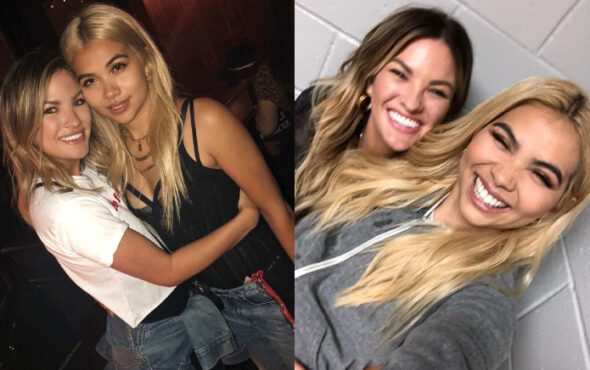 Over the last few years, the openly gay singer has cultivated a welcoming and LGBTQ+ inclusive environment for her expansive queer fanbase.

From tracks like Girls Like Girls and She to her impactful music video for One Bad Night, Kiyoko has rightfully earned the title of Lesbian Jesus.

On 20 May, Kiyoko continued to highlight the LGBTQ+ community while also shedding light on her personal life with her new song, For The Girls.

In the track’s accompanying music video, the 31-year-old is shown as the first lesbian Bachelorette.

Like the series, Kiyoko meets an array of contestants who are all set to fight for her heart amongst a luxurious mansion backdrop.

As the video progresses, Kiyoko begins to form connections with the ladies, who all have colourful and unique personalities.

However, during the tense rose ceremony, the singer and the show’s contestants are interrupted by a mystery guest – which ends up being Tilley.

At the end of the video, Kiyoko and the former Bachelor star share knowing looks before the screen fades to black.

Shortly after the release of the video, Tilley took to social media to confirm their four-year-long relationship.

“Hard to say if this is a hard or soft launch, but it is a launch,” she wrote alongside a compilation video of the two.

In an additional post, Kiyoko wrote: “This photo is from the first night we met at my Expectations album release party, we took this picture after 5 minutes. Her shirt said ‘no time for romance’….. it’s been 4 years. I guess she had some time.”

Fans of the two also took to social media and praised the couple for their romantic announcement.

One Twitter user wrote: “Not me just finding out Hayley Kiyoko and Becca Tilley have been dating for 4 YEARS???”

Another fan tweeted: “Becca Tilley and Hayley Kiyoko INVENTED the soft launch. just three years of sapphic vibing and whisper networks about their relationship among wlw before an official announcement.”

Check out the music video for Hayley Kiyoko’s new track For The Girls below.