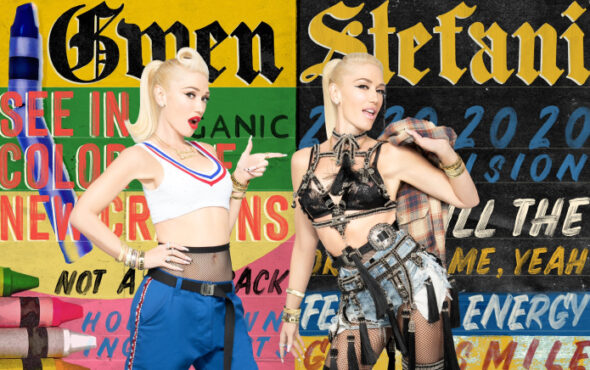 Gwen Stefani is back in a big way.

Today, the legendary singer-songwriter marked her return to pop with Let Me Reintroduce Myself, a reggae-heavy jam that takes inspiration from her early work with No Doubt.

“A simple recipe to get the best of me: homegrown ingredients, that’s what made you mess with me in the first place,” she sings, before referencing her number-one single, Hollaback Girl, “cause you know I’m like organic and it tastes great. I already gave you bananas.”

However, Gwen wants listeners to know that the song – co-written with Ross Golan and Luke Niccoli – isn’t a comeback, proclaiming in the chorus: “In case you forgot, no, I’m not records on your shelf. I’m still the original old me.”

In a statement, Gwen said: “This song is a way of saying I’m back with new music. It’s a fun, lighthearted song, because I got inspired and hopefully to bring a little bit of joy.

“The idea was to write a song that had a bit of a nostalgic feeling to it, so I think musically it reminds you of back in the day, going back to where I started musically which was with ska and reggae.

Let Me Reintroduce Myself is Gwen’s first non-holiday solo song since Misery, the final single from her third studio album, This Is What The Truth Feels Like.

The album, which became her first solo chart-topper in the United States, also spawned singles such as Used to Love You and Make Me Like You – both of which received critical acclaim.

Since then, she has released her first holiday album, You Make It Feel Like Christmas, and collaborated with her fiancé Blake Shelton on two well-received country anthems: Nobody But You and Happy Anywhere.

Gwen will perform the infectious new anthem on tonight’s episode of The Voice.

Let Me Reintroduce Myself is now available on streaming services – listen here on Apple Music or below.