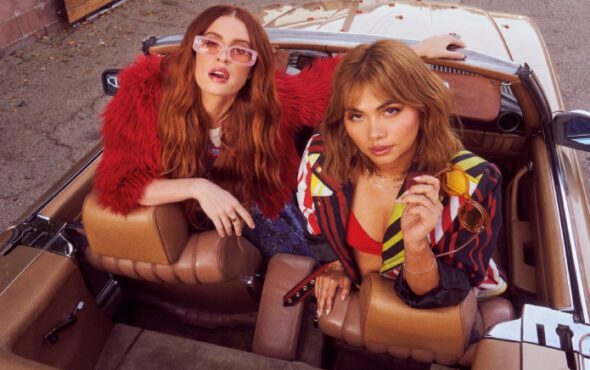 FLETCHER and Hayley Kiyoko have blessed us with a music video for their new queer anthem Cherry.

The visual opens up with the two singers posted on the front of a convertible Mercedes Bens while texting flip phones.

Filmed with a vintage styled lense, the video shifts to Fletcher and her love interest –who’s aptly named Cherry – in the kitchen flirtatiously making baked goods.

Flour is thrown, laughs are had and the carefree ambience of the scene is highlighted by the singer’s airy vocals.

“You’re such a dream. I’m dying to see. If it’s real, if it’s sweet, if you taste just like a cherry,” Fletcher sings.

The visual then transitions to shots of Hayley, who’s also dating Cherry, as they play games, have pillow fights and cook.

“Don’t do this to me. That look in your eyes. Your body’s got me outta my mind.” the song continues.

As the video progresses, you come to realize that Cherry is secretly dating both of the women.

The video ends with Hayley and Fletcher showing up outside their girlfriend’s house and realizing that they’re being two-timed.

But instead of being upset about the whole ordeal, the three agree to explore a relationship together and enter Cherry’s house.

In an interview with Out, Fletcher opened up about the Kristen Jan Wong directed video and said it was “so fun” to create.

“Such an amazing time on set, really enjoyed working with them on bringing this vision to life,” she said.

In terms of the final scene, she revealed that it was filmed on a “whim” and wasn’t originally planned.

“The initial concept of the video was that Hayley and I were both dating the same ‘Cherry’ without knowing,” she explained.

“We decided on the final scene on a whim when our director Kristen was wrapping the day and it’s definitely open to interpretation.”

Watch the unapologetically queer music video for Chery below or by clicking here.