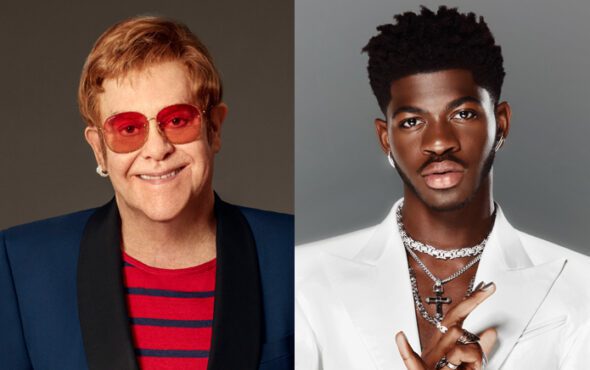 Elton John has praised queer artists who are using their music as a way of “breaking barriers down” in society.

Championing LGBTQ+ musicians has always been at the forefront of Elton’s work, something that continues to be prominent on his upcoming album.

The Lockdown Sessions, a collaboration record, features an array of LGBTQ+ artists such as Rina Sawayama, Lil Nas X and Miley Cyrus.

Elton tells GAY TIMES that “great queer talent” like these are a driving force for changing attitudes towards the LGBTQ+ community.

“Lil Nas X in particular is breaking barriers down amongst the hip hop community and the Black community which is really important, because that can be very homophobic sometimes,” Elton explains.

The Your Song singer, who is one of the world’s best-selling music artists of all time after debuting in the 1960s, has seen how industry attitudes towards LGBTQ+ musicians have changed over the years.

“There’s loads of us and we’re not going to do you any harm,” he tells GAY TIMES. “There’s so many great creative gay people out there and they are getting their dues because you can’t keep great songwriting and great artistry down.”

Elton adds: “If it’s great music, it shouldn’t be any problem whatsoever.”

The 74-year-old reveals that he still buys physical CDs and vinyls “every time I go into a record store.”

“I have never lost that feeling of going into a record store and buying something,” he explains.

Elton previously said that the last two years made him realise he is “a session musician” who can adapt to the changing world and industry.

“The last thing I expected to do during lockdown was make an album,” Elton revealed. “But, as the pandemic went on, one‐off projects kept cropping up.”