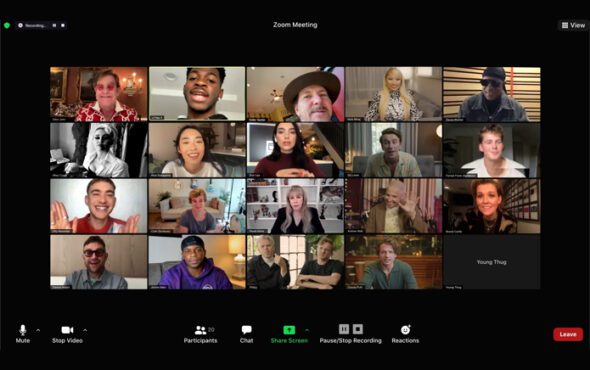 Elton John reunited with all of the collaborators from The Lockdown Sessions in a hilarious festive Zoom call.

Joined by the likes of Lil Nas X, Miley Cyrus and Charlie Puth, the group celebrated their work on Elton’s number one album as we enter the holiday season.

Elton’s latest record soared to the top of the charts, beating out fierce competition from the likes of Lana Del Rey and Duran Duran.

His collaboration with Dua Lipa, Cold Heart (PNAU Remix), features on The Lockdown Sessions and gave the 74-year-old his first UK number one single since 2005.

“It’s such an honour to be on this song and singing one of my favourite Elton songs,” Dua told the living legend on the Zoom call.

Their song together made chart history for Elton, as it became his 33rd song to reach the top 10 on the UK’s Official Singles Chart – making him the first and only act to secure a top 10 in six different decades.

Given that The Lockdown Sessions was recorded remotely because of the COVID-19 pandemic, the reunion of the collaborators celebrated the way the group worked with Elton.

“Congratulations and can’t wait to actually hang out with you in person,” Damon Albam told the Your Song singer.

Stevie Nicks added: “And it was just my pleasure to sing with you and I hope I did a good job on your song because I really tried hard and I love it so much.”

All of the album’s collaborators made time for the call, with a special guest making an appearance right at the end of the four-minute-long video.

After being forced to pause his Farewell Yellow Brick Road tour when the pandemic began to unfold last year, Elton began to focus on new projects.

“The last thing I expected to do during lockdown was make an album,” Elton explained at the time. “But, as the pandemic went on, one‐off projects kept cropping up.”

The Ultimate Zoom Call was created by Elton John’s Rocket Entertainment Group and AKQA and was released on 21 December – it can be viewed below or by clicking here.

You can read Elton John’s chat with GAY TIMES by clicking here.