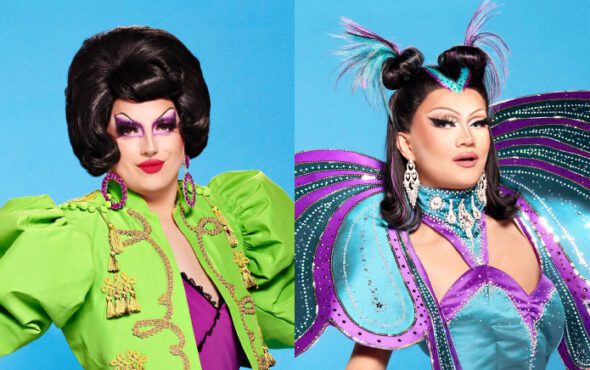 Choriza May has released the highly anticipated follow up to My Pussy is Like a Peach and it features none other than her Drag Race UK sister, River Medway.

The song keeps the “fruity theme” going, with the artwork and lyrics subtly referencing the pair’s infamous double elimination on the show.

“We could be miserable about it but really, there is a beautiful silver lining, we gained a sister for life,” Choriza tells GAY TIMES after joking that it was “absolutely dreadful” to work with River again after the show.

“We are strangely bonded and it really feels like we have been friends for years!

“Sometimes when life gives you lemons you have to make a gin and lemonade and we really did that!

“And if I’m honest I think that’s exactly what Mama Ru would want us to do, take the platform she gave us and make the most of all the highs but also the lows. We both see that double elimination as a gift.” The video shows animated versions of the two queens alongside their season three sisters Vanity Milan, Kitty Scott-Claus, Ella Vaday and Scarlett Harlett, who can all be seen wearing fruity lewks.

Choriza explains that doing the video this way meant she could achieve her “dream” to have them all appear – something which is harder than ever to do as the queens stay booked and busy after their season.

She adds that the track is an upbeat bop which “transports you to Choriza’s fun, hot, spicy and camp world!” “When I started working on the song with Kaity Rae and Eden Hunter, I basically briefed them with the characteristics of what in my head is the perfect summer song,” Choriza states. “A song you can play in a pool party with a mojito in hand and have a dance with your friends. Catchy, memorable and with fun lyrics.”

Fans of the star can expect more music from her in the future, as her “goal is to release an album with all fruit related songs.”

You can watch the music video for Feeling Fruity below or by clicking here.