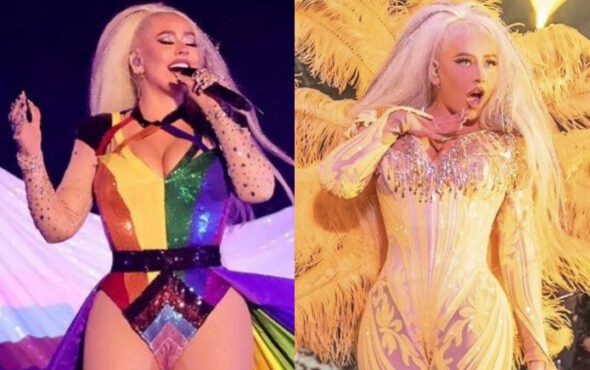 Throughout her expansive career, the talented singer-songwriter has been hailed as an LGBTQ+ ally and icon.

From her queer-inclusive music video for her song Beautiful to her long-standing advocacy, the Burlesque star has consistently uplifted and supported LGBTQ+ individuals.

On 11 June, the Back to Basics singer continued to showcase her allyship by headlining Los Angeles’ annual Pride celebration.

In true pop diva fashion, the Genie In a Bottle singer brought the house down with her spectacular performances and eye-opening outfits.

During her extensive set, the singer surprised fans with an array of guest performers, including Kim Petras and Paris Hilton.

The pop icon even brought out Mya to perform their 2001 Grammy-winning record Lady Marmalade.

But one of her most controversial outfits from the evening was her green-themed body suit that featured a bedazzled strap-on.

During the heavy moment, a group of Aguilera’s dancers raised “Say Gay” signs while her track Fall In Line played in the background.

Towards the end of her show, Aguilera thanked her LGBTQ+ fans for their constant support in a heartfelt statement.

“Thank you so much for having me tonight. I am so honoured. I am so grateful. I am so humbled by your love and your support over the last 20-plus years,” she said as reported by USA Today.

“I love these shows more than anything because you know what? We represent freedom – freedom of expression, owning who you are, fearlessness and also fantasy.”

Even though the LA Pride festivities have ended, Aguilera’s celebration of the LGBTQ+ community is far from over.

On 6 August, the Burlesque star will serve as the Saturday headliner during this year’s Brighton Pride.

“As we celebrate our (delayed) 30th anniversary, we are really thrilled to have secured an iconic star and LGBTQ+ ally such as Christina Aguilera to perform at the Preston Park Pride festival, our main fundraiser for the Brighton Rainbow Fund,” said Pride director Paul Kemp.

Here’s how fans reacted to Aguilera’s LA Pride performance below.

My first pride was nothing less than amazing. This was the first time I felt closer to my true self. Letting loose, having fun, and being surrounded by so much LOVE was an experience I’ll remember forever. XTINA, I love you forever!! 🙅🏻‍♂️🖤🌈 @xtina pic.twitter.com/ymMmMx48Nd