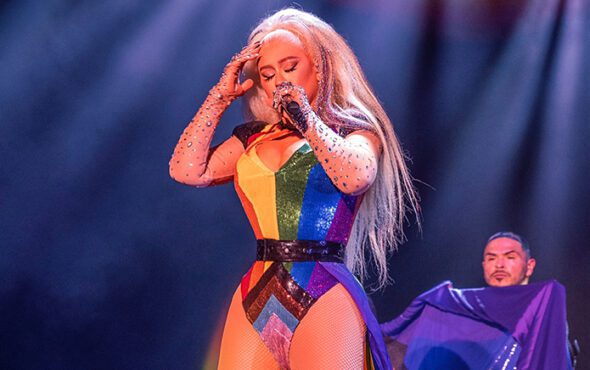 If you follow Christina Aguilera on TikTok you’ll know she’s well on her way to her Brighton and Hove Pride headline set this weekend, using her flight across the Atlantic to serve some fierce choreo.

The iconic superstar will bring a setlist of iconic hits with her for the highly-anticipated show, including Dirrty, Fighter, Genie In A Bottle and her LGBTQ+ anthem Beautiful.

“I’m all about people standing up for what they believe in, which is why I think the LGBTQ+ community feels connected to me,” she wrote for Billboard earlier this year.

“We’ve all come from struggle; we’ve all had to fight to be heard.”

Thousands will ascend on Preston Park on Saturday 6 August for the pop extravaganza for a day of celebration, love and inclusivity.

Ahead of her set, Christina has compiled an exclusive Pride playlist for GAY TIMES which features some of her favourite queer anthems by LGBTQ+ artists and some of our most dedicated allies – including herself of course.

Related: 10 years on, Christina Aguilera’s Bionic proves it really was ahead of its time

Not to mention a whole host of Christina’s own anthems – from Lady Marmalade to Candyman – that are a staple in LGBTQ+ nightlife venues the world over.

Christina Aguilera will play Brighton and Hove Pride this weekend at Fabuloso in Preston Park. Tickets are available here.