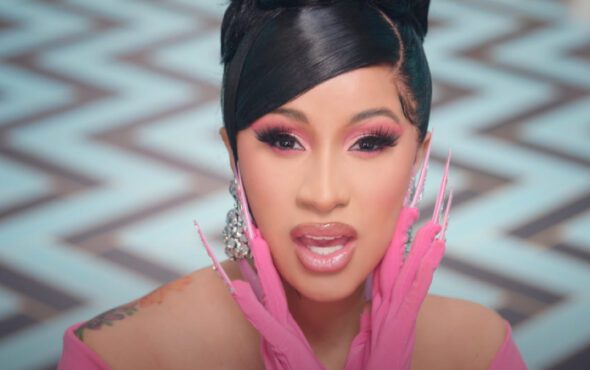 Cardi B has opened up about her thoughts regarding “queerbaiting” in a series of social media posts.

Taking to Twitter, the Money rapper wrote that the term forces artists, who may not be ready, to open up about their sexuality.

“I don’t like this new “queerbating” word. I feel like it pressure artists to talk about their sexuality or their experiences that they don’t feel comfortable speaking about,” she said.

“If an artist kiss a girl on a video does that mean she gotta show videos & text [with] other women?”

The 28-year-old’s comments are in response to the recent Rolling Stone article that tackles the subject.

The piece references Normani and Cardi’s music video for their single Wild Side, which features the two artists in a naked embrace.

Cardi goes on to say that the decision was partly made due to her growing baby bump while also stating that she’s always been open about her bisexuality.

“You do know we was trying to hide a whole baby bump right? Also I’m married to a man but I have [expressed] soo much about my bisexuality and my experience with girls,” she tweeted. “All of a sudden queerbaiting is the new word & people use it to the ground.”

I don’t like this new “queer baiting” word.I feel like it pressure artist to talk about their sexuality or their experiences that they don’t feel comfortable speaking about.If a artist kiss a girl on a video does that means she gotta show videos & text wit wit other women?

Uuummmm @RollingStone queer baiting? You do know we was trying to hide a whole baby bump right ?Also I’m married to a man but I have express soo much about my bisexuality and my experiences wit girls .All of a sudden “queer baiting” is the new word & people use it to the ground ! https://t.co/M3kn4NyJBs

This isn’t the first time that Cardi has discussed the topic of “queerbaiting” and her sexuality.

Back in 2018, the Grammy winner received backlash for her collaboration with Bebe Rexha and Rita Ora on the track Girls.

The single, which also featured Charli XCX, contained lyrics such as: “I ain’t one-sided, I’m open-minded, I’m 50-50 and I’m never gonna hide it.”

Soon after the release of the track, LGBTQ+ artists and fans accused the song of belittling the bi experience.

In response, Cardi told fans: “We never try to cause harm or had bad intentions with the song. I personally myself had experiences with other woman, shiieeett with a lot of woman! I though the song was a good song and I remember my experience.”

Artists like Harry Styles, Billie Eilish, and Nick Jonas have also been called out for profiting off of LGBTQ+ culture when it comes to their music videos and lyrics.