Avril Lavigne announces comeback single Bite Me out next week 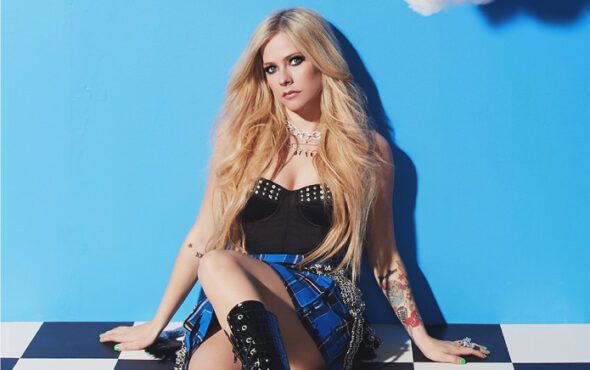 Avril Lavigne has announced a brand new single and the cover artwork is serving The Best Damn Thing realness.

The Pop Punk Queen is back, back, back again with a brand new single called Bite Me.

Avril took to social media on 5 November to share the news, asking fans if they’re ready for the song – it’s safe to say that we aren’t.

Electronic music producer Marshmello is one of the people tagged in the post, which has led to fans speculating over his involvement in Bite Me.

The single’s artwork shows the Sk8er Boi singer-songwriter sitting on the floor next to a heart-shaped cake with the song’s name written on it.

Avril’s look – a blue checkered skirt, huge heeled boots and studded shoulderless top – is reminiscent of an outfit from the Girlfriend music video, making us suspect the new track could be a return to pop punk for the artist.

Bite Me will be promoted on 10 November with a performance on The Late Late Show with James Corden, which Avril confirmed on social media.

She wrote: “Catch me and @travisbarker performing my first single on the @latelateshow with @JKCorden November 10th!”

It comes after Avril shared that she has signed to Travis Barker‘s label DTA Records on 3 November.

It will mark her first release with the label and gives us the first glimpse into her upcoming seventh studio album (which she confirmed was finished in February) and follow-up to 2019’s Head Above Water.

Are you ready to “BITE ME” ? My new song, November 10th. Pre save now: https://t.co/2KDyfqDnQw pic.twitter.com/pXRPb3H4VH

Bite Me will be released on 10 November and can be presaved by clicking here.

@avrillavigneBaby you can BITE ME ##TravisBarker