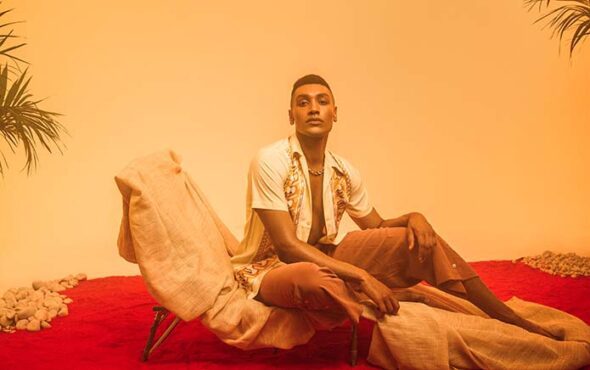 Arun Blair-Mangat has released his debut single, Diving Back In, alongside its sickening music video.

Inspired by the disco sound of the 1970s and the pop scene in the 1990s, the upbeat bop sees Arun unapologetically embrace getting back on the scene.

“I’m diving back in, not falling, but jumping, not looking for the love of my life,” he sings on the triumphant track.

The video, released on 8 October, sees Arun in a range of iconic looks with a corresponding colour theme as he performs choreography taught by Jaye Marshall.

The track was written by Arun, Jennifer Lucy Cook and Peter White, with the music video’s concept and edit being by Arun.

Prior to the release of Diving Back In, the musician has been a star of London’s West End after playing the gender non-conforming May in max Martin’s & Juliet musical.

“I’ve been telling people that it’s the perfect hybrid of going to a pop concert and a musical,” Arun previously told GAY TIMES of his role in & Juliet. “I don’t think I’ve ever been a part of a show that dares to mash those together and create this epic and interactive experience.

“The creative team have done this brilliant job of realising this as I didn’t know how it was going to sit when I did a reading of it two years before.

“I thought we’d go down the theatre route, but actually it blends the theatre and pop concert genre together so perfectly.”

He has also appeared in Kinky Boots, In the Heights and Leave to Remain – something which comes as no surprise given that he had already performed as a soloist at the Queen’s Golden Jubilee celebrations by the age of 10.

You can listen to the song below or by clicking here.