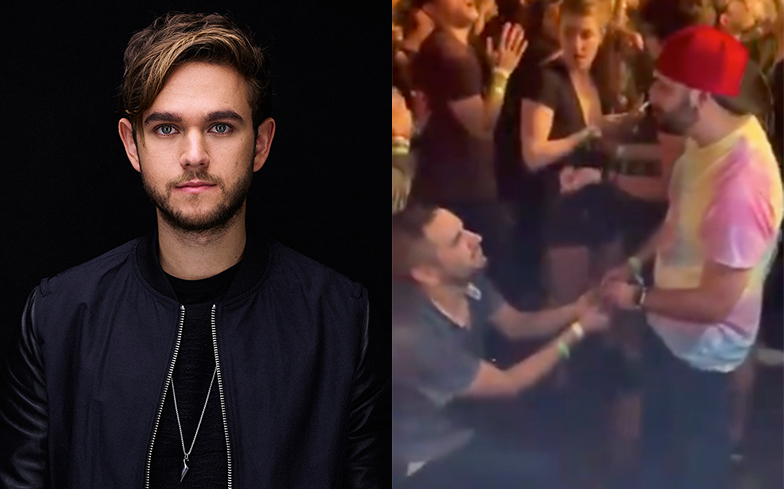 Zedd has hit back at a homophobe who called a same-sex proposal at his concert “disgusting”.

The DJ and producer, who’s worked with the likes of Ariana Grande and Troye Sivan, was performing at the Revention Music Centre in Houston, Texas on 27 September when a fan called David took the perfect opportunity to propose to his boyfriend.

The romantic moment happened during Zedd’s song Clarity, and was caught on camera by the couple’s friend Joseph, who shared the video on Twitter in the hope that the artist would see it.

“Zedd this happened last night at your show in Houston,” Joseph tweeted. “Thank you for the beautiful back drop for this special night!”

The video went viral, receiving an incredible 2.4 million views on Twitter and over 40,000 likes. David said he had “no idea” his friend had tweeted the video, but was “touched” by all the love and supportive comments.

It even caught the attention of Zedd himself, who wrote: “Awwwww congrats!!!! So happy for you guys and THANK YOU FOR DOING THIS DURING MY SHOW,” he wrote alongside several heart emoji.

David replied: “I was so nervous! But he said yes. Clarity was our first song together, I’ll probably tear up every time I hear it now. Thank you for giving me the venue or the happiest moment of my entire life.”

And when one hater decided to spread homophobia in the replies to the video, calling the couple’s engagement “soo disgusting”, Zedd wasn’t having any of it.

“Get the fuck outta here,” he replied.