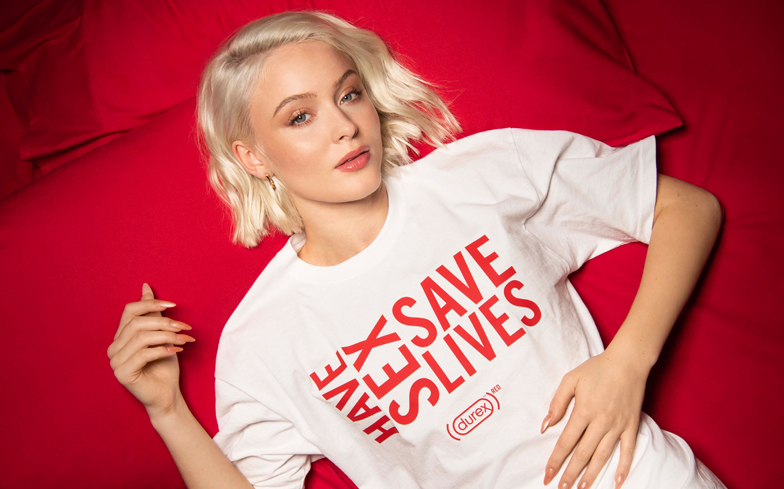 Zara Larsson is among a host of famous faces fronting a new campaign to raise awareness and money for the ongoing fight against HIV/AIDS.

The Swedish star has teamed up with Durex and (RED) to launch a special condom as part of a new campaign called Have Sex and Save Lives.

“For the first time ever, you can literally ‘Have Sex and Save Lives’,” said Zara. “It is empowering that we can all help to protect ourselves by having safe sex, and at the same time, join the fight to end AIDS through helping girls in South Africa who really need our support.

“Every two minutes an adolescent around the world is infected with HIV and it’s so important that my generation use their voices to encourage others to ‘give a f**k’ to stop this happening.”

Funds raised from the special edition (DUREX)RED condom will go directly to the ‘Keeping Girls in School Programme’ in South Africa, where 7.2 million people live with HIV.

The vital programme aims to reduce new HIV infections and pregnancies among young women in the region through encouraging girls to stay in education.

As part of this campaign, Durex will make a minimum donation of $5 million to The Global Fund.

The Bill & Melinda Gates Foundation will match Durex’s $5m contribution taking the total to a minimum of $10 million.

“37 million people are living with HIV around the world, and this ground-breaking new partnership with (RED) allows everyone to play a role in helping end AIDS. 69% of sexually active people around the world are having sex on a weekly basis, and not only is our mission to help protect them, but through this vital partnership, we hope to make a huge difference to young women who are disproportionately affected by this devastating disease in South Africa,” said Ben Wilson, Global Category Director, Durex.

World AIDS Day will take place on 1 December, so you have a month to support the cause and buy yourself a red ribbon.

Meanwhile, Zara Larsson recently released her new single Ruin My Life, which is the first cut to be lifted from her forthcoming album.