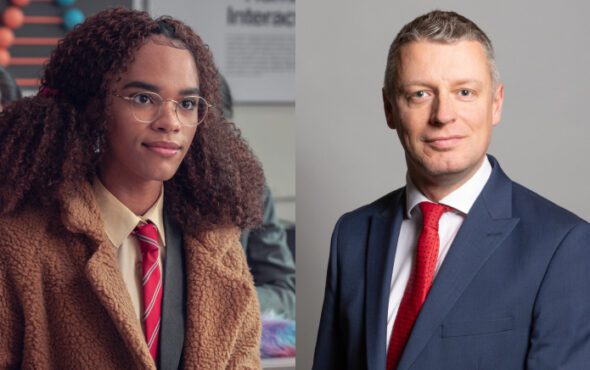 During a debate about including trans people in a ban of so-called ‘conversion therapy’ at Westminster Hall on 13 June, the Labour politician discussed the importance of LGBTQ+ role models and visibility for all aspects of the community.

“As some Members will know, I am an unapologetic fan of Netflix’s Heartstopper,” Pollard explained. “I remember being both Nick and Charlie at school. Yasmin Finney, who plays Elle, is epic in her acting; however, for me, it is her class and visibility as a trans actor, and her transfer to the Doctor Who universe, that has inspired not only me but young trans people across the world. That visibility and legitimacy has saved lives.”

Current plans would see adults still able to consent to ‘conversion therapy’, which has been widely condemned by health experts such as the National Health Service and World Health Organisation, with only those under the age of 18 being fully protected.

Pollard, who is Plymouth’s first openly gay MP, used Heartstopper to explain the importance of ensuring any ban covers all LGBTQ+ people.

"That visibility has changed lives." 🏳️‍⚧️

He added: “It is that world, as Alice Oseman wrote in Heartstopper —where our diversity is celebrated, not excluded; where people are drawn together in a broad hug, not with a big stick—that we should aim for with this legislation.

“That is why I want every Member in this place to know that this message should go out to young LGBT people: regardless of who you are and who you love, you have the right to be loved, safe and valued, not just by society but in law.

“That is at the heart of today’s debate. Let us say to young LGB, trans and non-binary people that they are enough, we have listened to them, and we will value them.”

Yasmin swiftly responded to Pollard, calling his acknowledgement “a moment for the history books.”

“Nothing better than to be seen as a young black trans girl just trying to make a difference,” she wrote in response to a GAY TIMES tweet showing the clip.

Netflix was recently renewed for a second and third season, with the first available to watch now on Netflix.

This is a moment for the history books…

Nothing better than to be seen as a young black trans girl just trying to make a difference❤️ https://t.co/E0r7FkRpjS