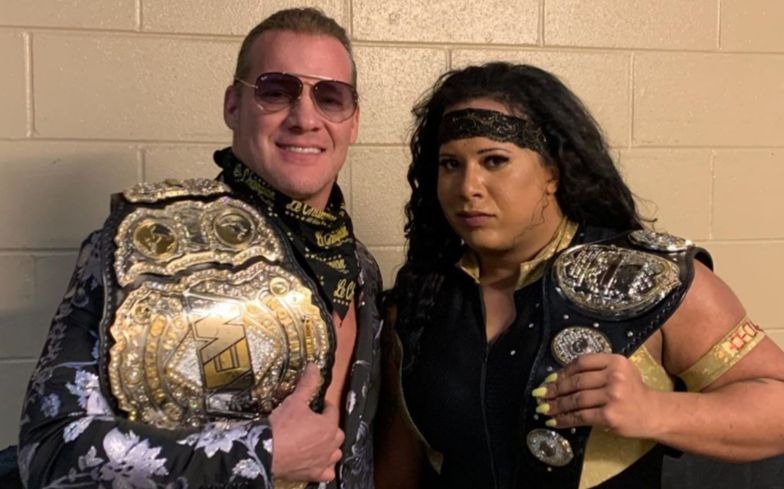 The professional wrestler has come out swinging for trans rights.

During the week, pro wrestler Chris Jericho met with the first trans wrestler to be signed to a major league, Nyla Rose. Rose was appearing on Jericho’s podcast, Talk Is Jericho.

During their talk, they discussed her relationship with her family and friends after coming to terms with her gender identity, online trolls and her position as a role model.

“#NylaRose explains how she was recruited into #AEW by @kennyomegamanx, training for wrestling as a man, her time as the legendary #RobotNinja, becoming big in Japan with #TofuWrestling, the near fatal bus crash she experienced, the meaning of #DILLIGAF, behind the scenes stories of her first match on @aewontnt, PLUS Nyla goes into great detail explaining her journey as a #Transgender female and explains in detail what exactly that transition entails, when she knew she was a woman as a teenager, her faith, how her friends and family reacted to her decision, how she deals with internet trolls, what makes her a true female from a biological standpoint, how she feels about being a role model for the #LGBTQ community & more on @Spotify, @itunes & @applepodcasts NOW!

“(This is one of my favourite episodes of #TIJ ever, as I learned a lot about things I had no idea about. Thanks for the education Nyla!) @westwoodone.”

Predictably however, online trolls did then surface in the comments of Jericho’s post. One comment wrote: “Why do you keep saying Her?”

To which Chris immediately responded with: “Her. HER!”

Another troll wrote: “True female from a biological stand point? That is trolling. Do better, Chris.”

Chris then hit back, saying: “Go study the transgender process and get back to me, junior.”

Thankfully, Chris’s post didn’t just elicit negative responses. One trans person wrote: “As a trans woman myself im proud of my sista and friend @nylarosebeast for sharing her lifes story and her battles with bigots and all around disrespectful individuals.

“And @chrisjerichofozzy you’ve always been one of my favorite performers of all time. This is just the icing on the cake. You rule Le CHAMPION!!!”

Another added: “Thank you so much Chris for being such a huge supporter of people who are trans.

“I have several friends that are and it truly means the world to them that the pronouns are correct. You have just made the list as my favorite wrestler of all time.”

And a third said: “Don’t even bother to pay attention to these worthless Marks.

“At the end of the day, Nyla is still women’s champ and shining while these dickheads will never amount to anything.”