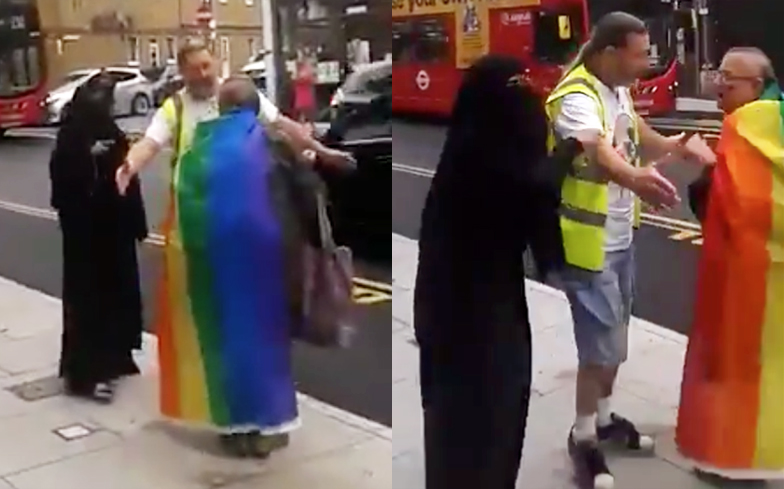 A woman has been filmed shouting homophobic abuse at Pride marchers in east London.

The video, which was recorded on Saturday 27 July during the Waltham Forest Pride parade in Walthamstow, shows a woman shouting “shame on you” at a Pride-goer wrapped in a rainbow flag.

Despite the abuse, the victim replied: “We still love you, you will not shame me.”

“Gutted to see this and clear such hatred isn’t acceptable anywhere let alone in our home town,” she wrote on Twitter.

“Proud that many from all faiths and none today including Islam joined the Waltham Forest Pride march to show Walthamstow really does mean welcome.”

Gutted to see this and clear such hatred isn't acceptable anywhere let alone in our home town- proud that many from all faiths and none today including Islam joined the Waltham Forest Pride march to show Walthamstow really does mean welcome #loveislove https://t.co/9ocEyy4tsQ

The Metropolitan Police have said they are investigating the suspected hate crime and have appealed for any witness to come forward.

“We are aware of footage circulating on social media of abuse directed at those taking part in the Waltham Forest Pride event and enquiries are underway,” they said in a statement.

“Abusing someone because of their sexual orientation or gender identity is a hate crime and we would encourage victims and those who were there when this took place to come forward.

“If you have been verbally or physically abused, harassed or attacked in any way by someone because you are or they think you are LGBT+ please report these crimes to police or through a third party agency.”

A recent report from The Guardian found that anti-LGBTQ hate crimes have more than doubled in England and Wales in the past five years.

The Waltham Forest Pride Organising Committee have released a statement condemning the homophobic abuse that took place, but also warning people that responding to the video with Islamophobia is not the way forward.

“This morning we were made aware of a video showing an individual shouting homophobic abuse at some in the parade,” they said.

“The police are looking into this as a potential hate crime and while we condemn all homophobic abuse, we also condemn outrightly and unequivocally all forms of hatred and abuse, including Islamophobia and anti-Semitism, and want to make it absolutely clear that this was one, lone individual and in no way do these views represent the views of any section of the local community.

“It’s depressing, but comes as no surprise, that far-right commentators like Katie Hopkins have seized on this video and tried to use it to hasten their twisted view of society in order to stigmatise the Muslim community in Waltham Forest.

“We utterly condemn her, and anyone else, who attempts to use this incident to fan the flames of discord between communities in our great borough. Hear this – it hasn’t worked in the past, it won’t work now, and it never will.

“We will continue to work with the Muslim community and value their support, because none of us are free until all of us are free.”