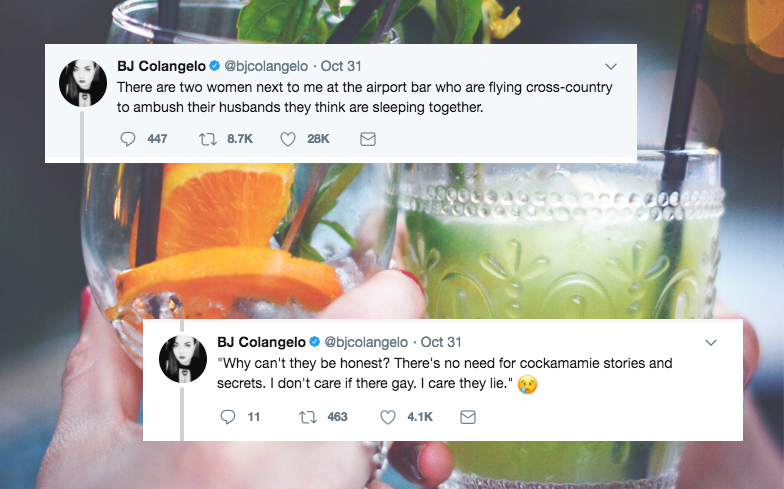 Quite possibly the most epic overheard conversation ever…

While Britney-Jade Colangelo was recently waiting for a flight at an airport bar in Ohio, she couldn’t help but eavesdrop into a nearby conversation because the plot was just too darn intriguing.

The 27-year-old live-tweeted the chat between two women, who were on their way to confront their husbands whom they believed had embarked on a love affair together.

“There are two women next to me at the airport bar who are flying cross-country to ambush their husbands they think are sleeping together,” Colangelo started.

“The women have never met until this moment. ‘Hopefully I’ll gain a sister in you if I lose my husband.’

There are two women next to me at the airport bar who are flying cross-country to ambush their husbands they think are sleeping together.

“One of the women has an extreme couponer’s amount of gum in her purse. ‘You can’t yell at someone with bad breath. My dad taught me that.’

“I am going to live-tweet the fuck out of my eavesdropping,” she continued. Grab the popcorn.

“‘Why can’t they be honest? There’s no need for cockamamie stories and secrets. I don’t care if there gay. I care they lie.'”

Colangelo goes on to say that the women ordered shots, while labelling the who situation “my new favourite sitcom pilot”.

She continued: “I’ve never seen a 50+ year old white lady snap gum with this much vigor. Shot lady: ‘My daughter’s boyfriend thought my husband was gay.’

“‘I thought he was an asshole. I guess he’s just clairvoyant.’ She ordered another round.

“One of the women has a grandson. They’re sharing pics of their kids’ Halloween costumes. Shot lady: ‘Our husbands should be Bert and Ernie.'”

Over the next series of tweets, Colangelo explained that the ladies were heading to Chicago.

Colangelo continued: “Shot Lady: ‘Our husbands are fucking, or we’re both insane. Either way, were going to be okay. I promise.’ ADOPT ME SHOT LADY.

“Gum Lady: ‘At least my husband’s boyfriend has good taste in women.’ Shot Lady: ‘Yea. You’re pretty okay too.’ THIS IS 100% GRACE & FRANKIE.

“Shot Lady: ‘We can do this.’ Gum Lady: ‘You’re right. We can.’ Shot lady pounded something dark. They have left me.”

Colangelo concluded: “If your names are Jeffrey and and Richard and you’re on a ‘business trip’ in Chicago…your wives are coming for you. And they’ve bonded.”

The story has gone viral, with thousands liking and retweeting the thread.

Unfortunately, it looks like we’ll never know what Gum Lady and Shot Lady were confronted with when they landed in Chicago.