With laughter and slang, Buddhist monk proves a hit with LGBTQ+ Thais 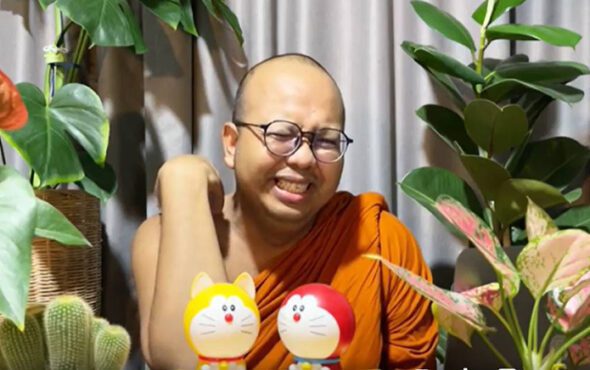 A Buddhist monk has become an unlikely champion of Thailand’s gay and transgender community by lacing his popular live-streamed talk shows with LGBTQ+ slang, irreverent humour and social commentary that fans say are helping to challenge taboos.

In contrast to the sombre tone of most religious teaching, Phramaha Paivan Warawanno giggles through the shows as he reads comments from viewers mocking his robes as an “orange dress” and addressing him with a term used to refer to transgender women.

“At first I couldn’t understand the meaning (of these LGBTQ+ slang terms), but I thought they were funny and was curious to see if people would laugh if I used them,” said Phramaha Paivan, 29, who has more than 2 million Facebook followers.

“So I tried (using the words) and it has worked well,” he told the Thomson Reuters Foundation from his temple in the capital, Bangkok.

Besides adopting LGBTQ+ slang to refer to himself and other monks, he talks about social media influencers popular with gay, bisexual and trans Thais during the shows, which are filmed at the temple in a studio adorned with pot plants and toy animals.

While his approach has drawn criticism from religious conservatives, members of the LGBTQ+ community say it has brought down barriers.

“I have never wanted to ask a monk questions, but this time I have the courage to ask things like whether a katoey (transgender woman) can be ordained,” said Thitipan Raksasat, an LGBTQ+ film director who has more than half a million followers on video-sharing platform TikTok.

“He (Phramaha Paivan) knows katoey lingo even more than a katoey,” she said.

Officially, only men can become monks and novices in Thailand under a Buddhist order that since 1928 has forbidden the ordination of women. The country does not recognise female monks or novices.

Thai monks are increasingly using social media to communicate dhamma (religious) teachings and social issues to young people, but Phramaha Paivan’s shows are unusual for their informal language and jokes.

“His acceptance towards LGBT and marginalised people makes him different from the typical monk who chooses to approach rich people and high-ranking government officials,” said Jaturong Jongarsa, a Buddhist scholar.

“That’s why he has become popular,” he added.

Phramaha Paivan’s shows have gone viral since LGBTQ+ people started sharing them on Facebook, but his social media fame has drawn the attention of religious and state authorities in the socially conservative country.

Earlier this week, a government committee summoned Phramaha Paivan and another celebrity monk with whom he hosted a live stream, asking them to increase the amount of air time devoted to strictly religious matters.

Some conservative figures have called for the pair to be defrocked, and the country’s highest Buddhist governing body – the Sangha Supreme Council – is set to determine whether they have violated a code of conduct for monks.

Ordained as a novice monk at the age of 12, Phramaha Paivan first captured media attention when he urged the country’s military junta to release students who were arrested after organising protests against the 2014 military coup.

But despite such incursions into political affairs, Phramaha Paivan said the aim of his shows was to draw people from all segments of society to Buddhist teachings.