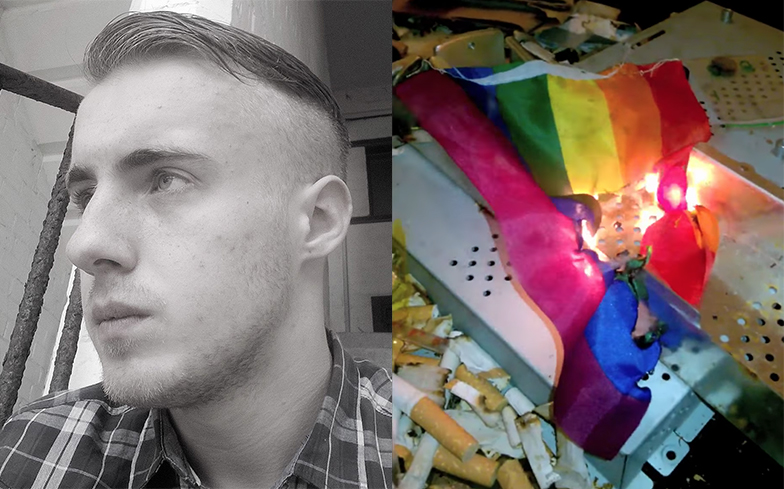 A white supremacist who plotted a ‘murderous attack’ on a gay Pride event has been found guilty.

Ethan Stables, 20, was planning to attack people during an LGBTQ Pride event at the New Empire pub in his hometown of Barrows-in-Furness, Cumbria on 23 June last year, prosecutors told Leeds Crown Court.

His attack was foiled after he shared his plans with a white supremacist Facebook group. A member of the private group who saw the messages alerted the police and shared a warning on Twitter.

“There’s a Pride night. I’m going to walk in with a fucking machete and slaughter every single one of them,” he wrote. “I don’t want to live in a gay world and I sure as hell don’t want my children living in one.”

Police also uncovered a YouTube video of Stables burning a rainbow flag, where he can be heard saying: “That rainbow [is] so much nicer when it’s on fire. It’s just like gay people. Much nicer when they’re on fire.”

The defendant was arrested near the pub during a last act of reconnaissance on the evening of the Pride event. He had planned to return later that night to carry out the attack, the jury heard.

Despite his anti-gay views, Stables told the court that he is bisexual and has previously had a same-sex experience, and explained he hadn’t divulged this information before because he was afraid of his family’s reaction.

He claimed he posted the comments on Facebook to impress his far-right friends, and was “ashamed” of his sexuality.

He added: “Between 2016 and his arrest in 2017, he was planning and preparing to commit acts of terrorism directed towards members of these groups but, primarily, directed towards people who were lesbian or gay.

“His purpose in these acts of preparation was to launch a murderous attack on members of these communities – in particular, the prosecution suggests, people who were gay.”

The court also heard that Stables had made a series of ominous Google searches including ‘I want to go on a killing spree’ and ‘How to be a terrorist’.

Stables was found guilty of preparing an act of terrorism, threats to kill, and possessing explosives.

He returns to court for sentencing on Wednesday.