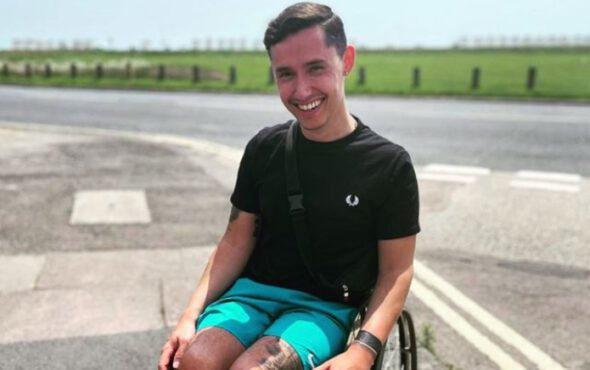 A wheelchair user was allegedly forcibly removed from the dancefloor of an LGBTQ+ nightclub in Brighton by the venue’s staff.

During a night out at Legends on 14 November, Tyler Paul said he was made to leave the dancefloor by security because of being in a wheelchair.

In a video of the incident shared to social media, Paul appears to be grabbed by a staff member who then escorts him off the venue’s basement dance floor.

“My experience at Legends was shocking,” the 29-year-old tells GAY TIMES. “I have never been physically removed from a club before. The bouncer’s actions made me feel powerless and at risk.”

Legends issued a statement apologising for what happened after the clip went viral.

“The social media coverage has made us sad and provides only a snapshot of what happened,” a spokesperson said. “Our basement nightclub is not a safe space for people with wheelchair supported mobility issues given the physical constraints of the building, which spans three centuries.”

Paul, who has cerebral palsy, said he walked to the basement of the nightclub as a friend carried his wheelchair after reportedly being asked to sign a document saying he consented to going downstairs.

Despite this, a bouncer at Legends allegedly asked him to leave roughly 10 minutes later.

“The footage didn’t capture when I was trying to hold on to a table to stop myself being pushed along by the bouncer,” Paul explains. “This is why the incident could have led to serious injury. When I left the venue, the bouncer tried to confiscate my friend’s phone who recorded the footage. I also waited outside for 40 minutes for a manager, but my requests were ignored.”

The statement from Legends alleged that fire regulations at the venue prevent wheelchair-users from entering the basement area and claimed that Paul “refused” to go to the ground floor when asked.

The venue added: “When the customer refused, with full professionalism, our security team assisted in returning him to the ground floor where he was encouraged to enjoy the rest of his evening.

“We believe this incident was filmed but the footage does not provide a complete picture, which is upsetting for all concerned; also, the suggestion that our actions were driven because the customer was disabled is simply not the case.”

Paul said that the incident has left him “feeling numb” and nervous about going on a night out again in the future.

“I used to love a night out and would always get involved in social events,” he explains to GAY TIMES. “This incident has left me feeling numb and it will take me some time to feel confident and safe enough to go out to a nightclub again.”

Legends did not respond to GAY TIMES’ request for additional comment on the incident.