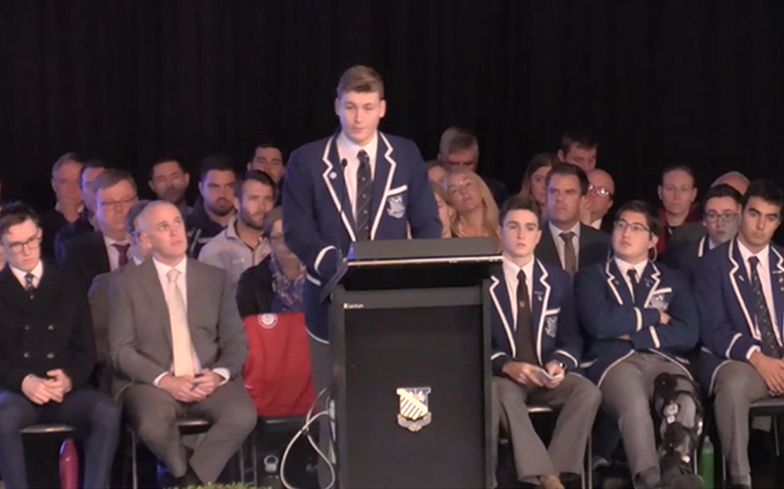 A student came out to his entire school in an emotional speech.

Finn Stannard, a student at St. Ignatius’ College in Sydney, made the brave announcement about his sexuality – and his struggles to accept himself – to over 1,500 of his classmates and teachers in a packed assembly hall.

“I’ve been working towards this speech for four years,” he explained. “In those four years, I have come to understand who I am and how to not be sorry for being myself.”

Finn recalled how the first time he told someone he was gay was at the age of 13, and that it took him another 18 months to tell his parents, who said they would “always love” him regardless of his sexuality.

“While my family handled the news of my sexual identity perfectly, outside of home, being gay has not always been easy. I have been the subject of countless rumours and unpleasant jokes,” he said.

“Being different, whether it’s being gay or being part of another minority group, can be challenging but it does not have to be scary and isolating.”

He continued: “I have come a long way from the scared Year 8 boy who would hide in his room in the dark. Since then, I have come to know who I am and what I stand for.

“Accepting and loving who you are is one of the greatest challenges you will ever encounter. Every person in this room is currently, or will at some point, experience this challenge.

“No amount of school or tests can teach us to love and accept ourselves and others. But every single one of you can help, in your own way, by accepting others for exactly who they are.”

The speech, which was made back in June and released in video form by SBS News this week, received a standing ovation from his classmates, and since then Finn has taken his boyfriend to the school formal.

This is the moment a gay student at one of Sydney’s most elite Catholic schools – that boasts former prime minister Tony Abbott and Barnaby Joyce among its alumni – stood up in a packed assembly hall of more than 1,500 students and came out pic.twitter.com/NyZxffFBmr

Paul Hines, the school’s principal, called the speech a “watershed” moment for the school.

“I’m not sure anyone chooses their sexuality, that’s who they are and therefore we need to be open to that and to accept it and to make sure we live in communities of inclusion – and with that will come diversity.

“Certainly that’s the case in the world beyond so in my view that should be the case in schools.”

You can watch Finn Stannard’s full coming out speech here.