Karen Pence to teach at school that bans LGBTQ students 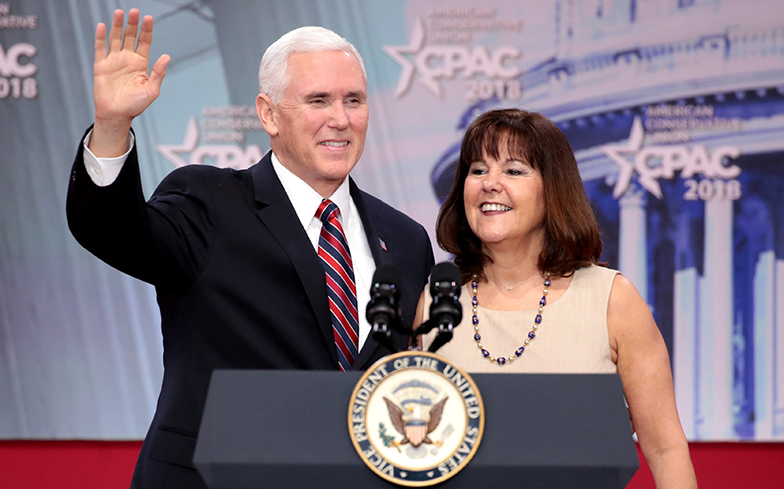 Karen Pence has started a job at a school that bans LGBTQ students and staff.

The second lady of the United States, who’s married to current Vice President Mike Pence, will be teaching twice a week at an elementary school in Springfield, northern Virginia, called Immanuel Christian.

Parents of students who attend the school are required to sign a form – which can be viewed here – stating that students who condone or engage in “sexual immorality, homosexual activity or bi-sexual activity” can be refused admission or removed.

Meanwhile, an employment application for the school states that staff must not engage in “homosexual or lesbian sexual activity” or “transgender identity”, which are described as “violation[s] of the unique roles of male and female”.

The news has led to backlash among LGBTQ people and their allies, including Human Rights Campaign President Chad Griffin.

“Why not serve at a school that welcomes everyone?” he tweeted. “Not a week passes without some reminder that the Pences view LGBTQ people as second class citizens.”

Why not serve at a school that welcomes everyone? Not a week passes without some reminder that the Pences view LGBTQ people as second class citizens. https://t.co/j54PiHL6qn

Kara Brooks, a spokesperson for Karen Pence, defended the second lady’s decision to return to teach at the school and argued it was “absurd” that people were attacking her.

“Mrs Pence has returned to the school where she previously taught for 12 years,” she said in a statement. “It’s absurd that her decision to teach art to children at a Christian school, and the school’s religious beliefs, are under attack.”

Virginia is one of several states in America that does not prohibit discrimination on the basis of sexuality and gender identity.

In an interview with the Catholic-themed Eternal World Television Network, Vice President Mike Pence said news reports criticising the second lady’s decision to teach at the anti-LGBTQ school were “deeply offensive” to them.

“We’ll let the critics roll of our backs, but this criticism of Christian education should stop,” he said.

Pence has repeatedly shown an anti-LGBTQ stance during his career – he supports discrimination based on religious beliefs, said same-sex marriage would lead to “societal collapse”, and voted against passing a non-discrimination act.

Back in 2000, Pence proposed a shift in government funds from the Ryan White Act (which helps those living with HIV/AIDS) to “institutions which provide assistance to those seeking to change their sexual behaviour”.

In November last year, he failed to mention the LGBTQ community in his World AIDS Day speech, despite the community being disproportionately affected by HIV & AIDs, particularly during the 1980s epidemic.