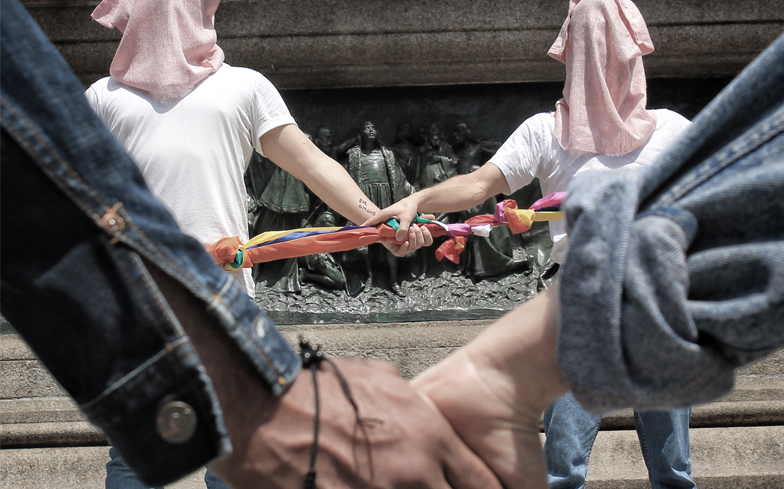 Over  year after the first reports of Chechnya’s anti-gay purge emerged, activists in New York City held a protest this weekend demanding action be taken over the atrocious and fatal discrimination that took place.

Russian newspaper Novaya Gazetta broke the story that up to 26 men had been killed as part of an alleged anti-gay purge in Chechnya last March.

Chilling reports of young gay men being murdered by their own family members followed, as authorities told parents to kill them – or they’ll do it themselves.

During their non-violent protest in Columbus Circle in New York City on Saturday, 28 April, Voices4 made a series of demands which would see the Chechen authorities held accountable for their actions.

There has been no action taken by the international community since reports of the wrongful detentions and abuse of gay and bisexual men in Chechnya surfaced.

The group have demanded that there be an immediate release of the CPT report by the Russian Government, which was allegedly conducted last year.

“Public access to the report will a) corroborate or contradict the Russian Ministry’s statement that ‘the CPT’s delegation found no confirmation of extrajudicial executions/punishments or torture.’ b) Present the need for additional, more unrestricted investigations via the UN, EU, or European Council to take place,” they stated.

Secondly, they added: “A third party investigation into these allegations​ conducted by an international governing body with the authority to bring charges against the Chechen authorities, such as the European Court of Human Rights. We also reiterate our previous call for an investigation into the disappearance of Zelimkhan Bakaev.”

It was reported he was bundled into a car hours after arriving in the Russian republic on 8 August, 2017, and hasn’t been heard from since.

A few months later, a chilling report claimed he had been murdered by authorities in Chechnya as part of their crackdown on LGBTQ people.

Chechen officials denied any involvement of the disappearance of Bakaev, and suggested that he has simply just left the country.

However, campaign group Human Rights Watch (HRW) then said: “There is little doubt he was targeted because of his sexual orientation.”

Chechen leader Ramzan Kadyrov later spoke about Bakaev’s disappearance, not only denying any responsibility but suggesting that he was killed by his own family for being gay.

Finally, Voices4’s third demand is simple but arguably the most important: “We demand that the Chechen authorities responsible for the reported atrocities be brought to justice.”

Speaking about their protest this weekend, Voices4 founder Adam Eli said: “This protest, and our group, carry a message of universal queer solidarity. We speak out because if the queer community doesn’t stand up for its most marginalized members then nobody else will.

“We speak out to push our beloved LGBTQIA+ movement forward. The moderate freedom SOME of us have right now in America does not give us license to stop fighting.”

Voices4 administrator Wyatt Harms added: ““As I was hooded with my hands tied and standing in the hot sun, I felt a bit uncomfortable.

“It was hard to see what all was happening and every part of me wanted to join fully in the protest, but I knew I was standing in for my queer siblings whose voices have been silenced.

RuPaul’s Drag Race star Milk, Tyler Oakley, Zeke Thomas and NYC drag queen Martin Cummings were among some of the high-profile protesters on the day.

If you want to find out more about Voices4 and the work they are doing to fight for total global queer liberation, you can visit their official website here.