Vladimir Putin mocks US embassy for flying the rainbow flag 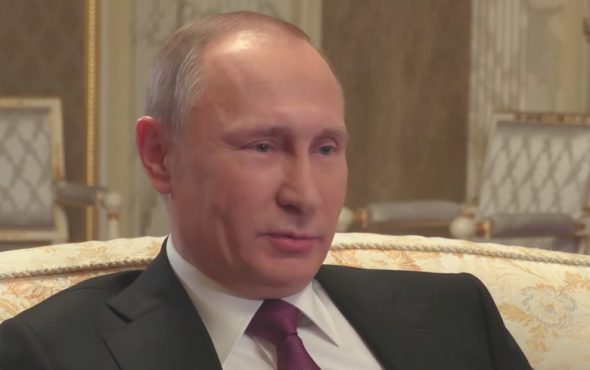 Russian president Vladimir Putin, who recently extended his premiership to 2036 following a referendum, has mocked the US embassy for flying the rainbow flag.

During a televised news conference, Putin was informed by a lawmaker that the embassy was flying the flag. When he was told that it was the American embassy, he responded by saying: “Let them celebrate. They’ve shown a certain something about the people who work there.”

Referencing Russia’s ‘gay propaganda’ law, which was passed in 2013 and banned the promotion of “non-traditional” sexual orientations to minors, he added: “It’s no big deal though. We have spoken about this many times, and our position is clear.

“Yes, we passed a law banning the propaganda of homosexuality among minors. So what? Let people grow up, become adults and then decide their own destinies.”

Under the law, a Calvin Klein advert was banned, there were calls to ban the game FIFA 17, and the Warwick Rowers naked calendar was banned. The law also banned a website that ran articles on LGBTQ+ health issues, including HIV/AIDS.

And during the conference, a conservative lawmaker and head of the Union of Women of Russia, Yekaterina Lakhova, claimed that an ice-cream brand called Rainbow, which used rainbow imagery, could be in violation of the law.

“It’s indirect but all the same it forces our children to get used to the colours, to the flag that everyone is hanging up, even on that embassy,” she said.

The embassy’s flying of the rainbow flag has attracted mixed responses in the country. Some people have visited the embassy to take selfies in front of it, while members of the conservative Orthodox Christian group, Sorok Sorokov, videotaped themselves trampling a rainbow flag in front of the embassy.

The referendum in which Putin’s reign in power was extended also changed Russia’s constitution to explicitly ban same-sex marriage, something Putin said would never become legal so long as was in power.

A survey released in April found that one in five Russians wanted to “eliminate” the LGBTQ+ community, however this number was a drop from when the poll was last done in 2015. Back then, 21% of Russians were in favour of elimination.

Related: This is what it’s like to be a drag queen in Russia, a country with anti-gay laws