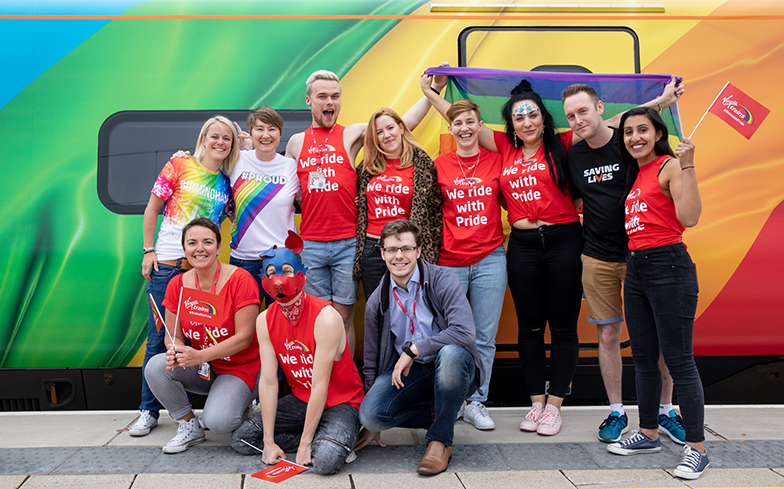 Just in time for Pride month, Virgin Trains unveiled a rainbow-coloured train as part of their #RideWithPride campaign.

As is commonplace when any company or sporting organisation decides to honour Pride Month, or celebrate the advancement of LGBTQ rights, or dare to include LGBTQ people in their adverts, people are quick to complain.

However, people who wished to criticise Virgin Trains were soon met with several sassy responses, courtesy of a representative who is only known as KM.

One Facebook user wrote: “I should have thought you ought to be concentrating on running your train service.” To which KM responded with: “We can support basic human rights for all while running our train service David. It’s called multi-tasking. ^KM”

He then hit back writing: “All style over substance, you are a transport company not Amnesty International.”

And KM was swift to respond with: “We don’t have to be a charity to be decent human beings David. We support numerous initiatives including CALM (Campaign Against Living Miserably) which tackles male suicides, one of the biggest issues we face as a transport company.

“We also have a large and diverse workforce and it’s important we continue to represent those who society has historically let down. ^KM”

Another user, called the whole thing a “publicity stunt,” but KM shut him down by saying: “Yes, supporting the rights of people in the LGBTQ+ community is just a publicity stunt, and not because we’re decent human beings with a large and diverse workforce. ^KM”

KM’s responses were met with tonnes of praise, with some even calling for her to become the company’s CEO. “Whoever is responding to these comments needs to be made CEO immediately. Love that it’s an actual human response and not a faceless pre thought out copy and paste reply. All the love.”

And with shut downs like that, we would support this move.