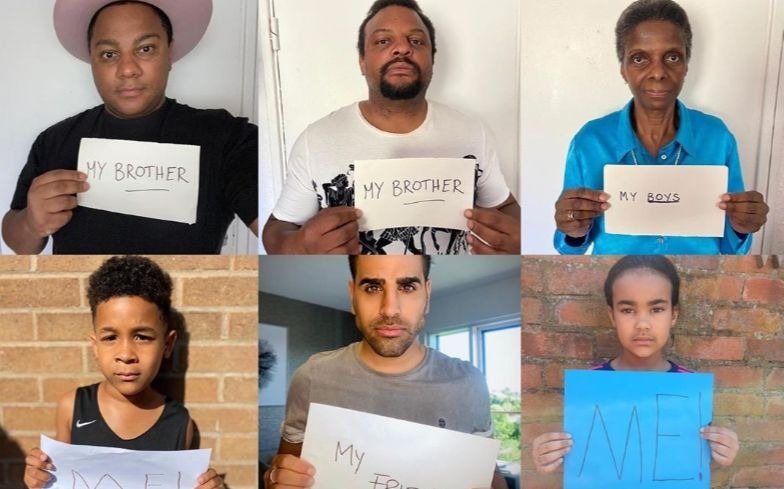 The Drag Race UK star launched the campaign following the death of George Floyd at the hands of police officers.

Drag Race UK star Vinegar Strokes has launched a new campaign, #ItCouldBe, to highlight the levels of anti-Black violence in the world, following the death of George Floyd and nationwide protests in the United States.

Announcing the campaign on social media, Vinegar wrote: “Today I’m launching the #ItCouldBe… campaign in direct response to the brutality faced by people of colour.

“I’ve been utterly horrified by those in power using it to silence and kill so many of us. Brutality, racism and white supremacy has no place in our world.

“The direct attacks of recent days reminds us that our very existence as POC remains political and routed in racism and prejudice. #BlackLivesMatter. We should be seen, heard and treated as equal. And it’s time for all of us to speak up and end racism. SO WHAT CAN YOU DO?!

“REMINDER: It’s not the responsibility for us people of colour to eradicate white supremacy from society. It’s our collective fight together, with YOU white allies, that we will see an equal society for all. There is no ‘us and them’ at a time like this.

“To quote @MichelleObama: ‘It’s up to all of us—Black, white, everyone—no matter how well-meaning we think we might be, to do the honest, uncomfortable work of rooting it out. It starts with self-examination and listening to those whose lives are different from our own.'”

Speaking about what the campaign would entail, alongside pictures, Vinegar continued: “I want to highlight how possible it could be that ANY OF US are the next person innocently targeted or even killed because of their ‘profile’ through a series of photographs.

“This is my brother; he’s a Black man, 40, living in London. Could he lose his life next?! #ItCouldBe

“This is my wonderful mum. Like so many Black families, she’s navigated a world that’s so often built to not serve her. She lives, like we so often do, through fear that her boys could be the next victim of racism. We must end this direct prejudice. We must make us all equal.

“It’s important we all stand together – our white allies too – and wipe out white supremacy from our planet. Share your photo with the hashtag #ItCouldBe… and stand with the BAME community in recognising the daily injustice we face, and the hope of protecting us from being next.

“Don’t forget to use the hashtag #ItCouldBe… Through the next few hours and days, we will be releasing images from across the community, famous faces and important white allies too, that are supporting the campaign. SILENCE IS NOT AN OPTION WHEN YOU ARE UNDER THREAT.”

And ending with an important message, Vinegar finished with a picture of a young child: “And if you don’t for me, or even my family, then for Ziah. Let’s give him a world that won’t turn him from cute to convict without even learning his name. Give him a future, and join the BAME community in stamping out racism and white supremacy forever. #BlacklivesMaters”

Vinegar has been posting images from the campaign on social media, with people holding up cards, some reading ‘My Friends’, others read ‘My Chosen Family’, ‘My Son’, ‘My Grandaughter’, ‘My Husband-To-Be.’

Famous faces have also been involved with the campaign, including Dr. Ranj Singh, whose card reads ‘My Friend’ and fellow Drag Race UK stars Blu Hydrangea and Cheryl Hole, with their cards reading ‘My Drag Sisters.’