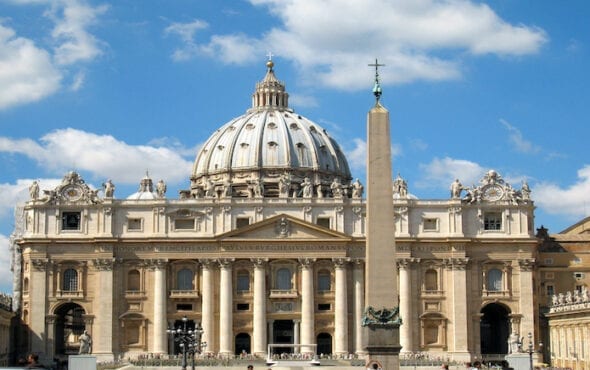 Congregation for the Doctrine of the Faith has declared the Catholic Church will not bless same-sex unions.

On Monday (March 15), the Vatican ruled that Catholic priests cannot bless same-sex unions as homosexual partnerships are “not ordered to the Creator’s plan”.

In response to being asked whether priests can bless gay couples, the Congregation for the Doctrine of the Faith (CDF) issued a two-page statement on the subject of same-sex unions.

The decree declared same-sex unions cannot “be considered licit” as they are not between a man and a woman, the Vatican ruled on Monday.

The Vatican’s ruling established the difference between the Catholic church’s welcoming of LGBTQ+ couples and the question of blessing same-sex unions.

In the ruling, the CDF said “the Christian community and its pastors must welcome with respect and sensitivity persons with homosexual inclinations”, but these relations cannot be blessed.

Following Catholic teachings, same-sex relations and unions defy the religious teaching that marriage can exist only between men and women, as a part of God’s plan, and is intended for the creation of children.

The Vatican have argued gay unions and same-sex relations are “not ordered to the Creator’s plan” and, therefore, cannot be blessed.

Francis DeBernardo, executive director of New Ways Ministry, supports the greater inclusion and acceptance of the LGBTQ+ community in churches. He believes the Vatican’s ruling will be overlooked by some Catholic figures.

“Catholic people recognize the holiness of the love between committed same-sex couples and recognize this love as divinely inspired and divinely supported and thus meets the standard to be blessed,” he said in a statement.

The Vatican does call for gay people to be treated fairly and with respect, however, the Catholic Church still teaches that same-sex relations and homosexual acts are “intrinsically disordered”, which highlights some level of hypocrisy in the institution’s attitudes.

The CDF’s barring of blessing a same-sex couple arose following a question it received, asking: “Does the Church have the power to give the blessing to unions of persons of the same sex?”

The granted response was “negative”, but also added that “the negative judgment on the blessing of unions of persons of the same sex does not imply a judgment on persons”.

In 2003 the Vatican issued a similar statement regarding same-sex unions. The CDF ruled that they could not offer “legal recognition of homosexual unions” as it would “obscure certain basic moral values” and lead to the “devaluation of the institution of marriage”.

The statement later addressed homosexuality as “deviant behaviour” and that offering same-sex unions the “same level as marriage: would lead to the approval of the unions which the Church refused to “defend these values, for the good of men and women and for the good of society itself.”

Monday’s ruling may have taken many LGBTQ+ Catholics by surprise. While the CDF has a complicated history with the acceptance of gay relationships and unions, the decree challenges Pope Francis’ infamous question “Who am I to judge?” when asked about gay people in the Catholic Church. Pope Francis also civil unions last year.