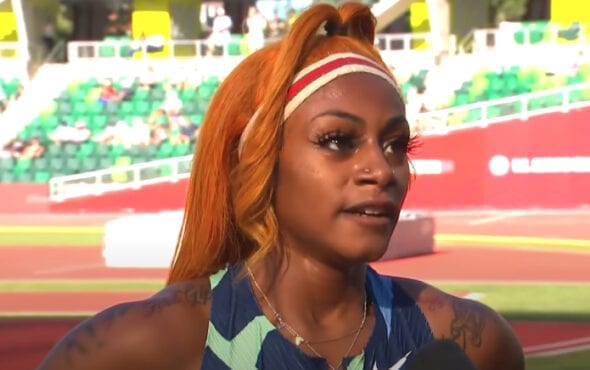 US track and field star and Olympic qualifier Sha’Carri Richardson has been disqualified from the upcoming games.

The news comes after Richardson failed a drug test – which found marijuana in her system.

During an interview on the Today show, the 21-year-old apologized for her actions and opened up about the recent death of her mother.

“I want to take responsibility for my actions. I know what I did,” she said. “I know what I’m supposed to do, [what] I’m allowed not to do and I still made that decision, but not making an excuse or looking for empathy in my case.”

Due to her test result, she is now on a one-month suspension.

Richardson goes on to explain the events leading up to her marijuana use and revealed that she found out her mother died by a reporter.

“I had an interview scheduled with my agent… I was just thinking ‘Oh it’s going to be a normal interview,'” she explained.

“But then on the interview to hear that information come from a complete stranger it was definitely nerve shocking. It’s just like how are you to tell me that?

“No offence to him at all, he was just doing his job but it definitely sent me into a state of mind and in a state of emotional panic.”

A few days after finding out her mother died, Richardson went on to qualify for the Olympics with her record-breaking win in the women’s 100-meter dash.

Before the news hit headlines on Friday (2 July), the young athlete seemingly referred to the situation in a cryptic tweet on 1 July, stating: “I am human.”

In the interview, Richardson referred to the tweet to reiterate that she’s human and makes mistakes.

“Like I tweeted yesterday, I’m human. We are human, I want to be as transparent as possible with you guys whether it’s good, whether it’s bad,” she said.

The Chief executive officer of the US Anti Doping Agency, Travis T Tygart, opened up about the news in a statement.

“The rules are clear, but this is heartbreaking on many levels; hopefully, her acceptance of responsibility and apology will be an important example to us all that we can successfully overcome our regrettable decisions,” he said.

The USADA organization also revealed that Richardson’s wins and record-breaking results have been disqualified and any prizes, medals and points have been forfeited.

Since the news fans, athletes and celebrities have spoken out against the decision to disqualify the young talent.

Athletic brand Nike and sponsor for Richardson released a statement sticking by the Olympic hopeful.

“We appreciate Sha’Carri’s honest and accountability and will continue to support her through this time,” they said.

Gabrielle Union took to Twitter and wrote: “Weed is great for many a thing but running faster isn’t one of them. LET HER RUN!!!”

Watch her full interview below.