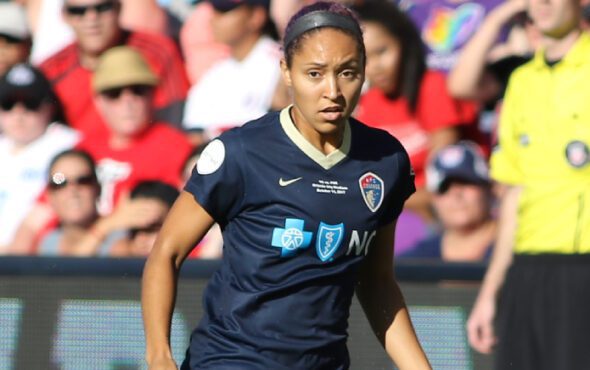 On 29 July, the North Carolina Courage played against the Washington Spirit as part of their Pride Night celebration.

The event, which was in partnership with Harmony: NC LGBT+ Allied Chamber of Commerce and the LGBT Center of Raleigh, featured an array of entertainment, food and activities for fans to take part in.

Alongside the free event, Courage players also wore a rainbow Pride jersey in an effort to celebrate their LGBTQ+ fans and promote inclusivity.

However, before the team hit the pitch against the Washington Spirit, a spokeswoman for the North Carolina team announced that Daniels – who plays as a defender on the team – would not be participating.

“Jaelene will not be rostered tonight as she has made the decision to not wear our Pride jersey,” they said in a statement, as reported by ESPN.

“While we’re disappointed with her choice, we respect her right to make that decision for herself.

“We’re excited to celebrate the LGBTQIA+ community with our fans, players and staff tonight and look forward to hosting our first ever Pride Festival before kickoff.”

Daniels has yet to release her own statement regarding her absence.

This isn’t the first time that she has boycotted a game over LGBTQ+ inclusive uniforms.

In 2017, the 29-year-old refused to play for US Women’s National Team because of the team’s Pride month jersey.

In an interview with the religiously affiliated TV network The 700 Club, she revealed that the decision stemmed from her Christian faith.

“I just felt so convicted in my spirit that it wasn’t my job to wear this jersey,” she said.

“I gave myself three days to just see and pray and determine what he was asking me to do in this situation… I knew in my spirit I was doing the right thing. I knew I was being obedient.”

Daniels isn’t the only athlete to sit out of a game because of an LGBTQ+ inclusive jersey.

Over the last few months, conservative players across the expansive sports community have refused to wear LGBTQ+ inclusive uniforms due to their “religious and cultural beliefs.”

Back in June, five Tampa Bay Rays players opted out of wearing a Pride logo on their uniform during the team’s Pride Night game.