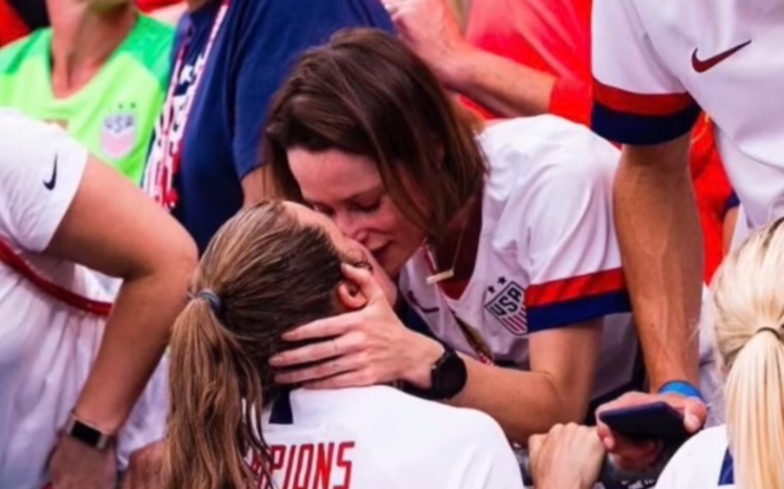 The kiss came after the US women’s team won the World Cup.

US footballer Kelley O’Hara has seemingly nonchalantly come out by kissing her girlfriend after the US national team won this year’s Women’s World Cup.

In the celebrations after the final whistle, Kelley ran to the stands, among others players, and kissed her girlfriend. Other members of the US women’s football team like Megan Rapinoe, Ali Krieger and Ashlyn Harris are also LGBTQ, the latter of whom are engaged.

Writing on SB Nation, Kim McCauley praised Kelley, writing: “This is not a shocking or revolutionary act in 2019. Lots of people are queer in public now, and everyone knows there are queer players on the United States women’s national soccer team.

“But what made this moment significant is that O’Hara had not previously made any kind of announcement about her partner or sexual orientation.

“She didn’t follow this moment up with an interview, a social media post, or a proclamation of any kind. She just had an affectionate moment with her partner, then continued her life as normal, because what she did is normal and should not require an explanation.”

Billie Jean King was the first female athlete to admit to being gay, but only after being outed in a 1981 lawsuit. It hurt her image. Yesterday, after winning the world cup, Kelley O’Hara—who wasn’t previously out—ran to the sideline & kissed her girlfriend. How far we’ve come. pic.twitter.com/E2Bl9gXuXS

Megan Rapinoe, a lesbian player and midfielder for the team, has previously spoken about the need for LGBTQ players on sports teams.

In an interview with the Guardian, she said: “You can’t win a championship without gays on your team – it’s never been done before, ever. That’s science, right there!

“I’m motivated by people who like me, who are fighting for the same things. I take more energy from that than from trying to prove anyone wrong. That’s draining on yourself. But for me, to be gay and fabulous, during Pride month at the World Cup, is nice.”