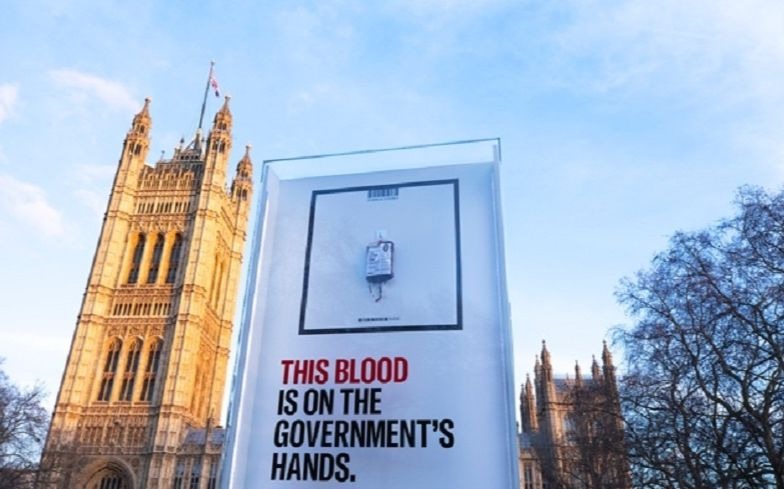 The blood is displayed as a protest against laws banning gay and bisexual men from donating blood.

UNILAD and FreedomToDonate are displaying pints of blood from their ‘Illegal Blood Bank’ to protest the laws banning gay and bisexual men from donating blood unless they abstain from sex for three months.

All of the blood donated was tested by qualified medical professionals, and 100% of it came back as safe, highlighting the amount of safe blood in the United Kingdom going to waste, especially when the NHS needs 135,000 news donors each year.

The healthy blood, which cannot be used for transfusions due to the existing policy, will be displayed outside parliament, Piccadilly Circus and Oxford Street amongst other central London locations, between 8am and 6pm today (18 December).

The campaign screened potential donors on individual factors and behaviours which impact risk, such as whether they’d had a new partner in the last three months. This system enabled the organisations to identify safe donors, using a fairer system, which assessed all potential donors equally based on their behaviour.

With the new parliament now assembled, the campaign is calling on the government and the Ministry of Health to commit to reviewing the policy as a priority, so new donors who are safe to donate are able to, in order to ensure the NHS receives the safe supply of blood it needs.

Ethan Spibey, the founder of FreedomToDonate, said: “It’s of paramount importance that we ensure blood is safe for transmission.

“We’re working with UNILAD to help raise awareness of the fact that there’s thousands of gay and bisexual men who could potentially donate perfectly safely, through an alternative model.

“The adoption of such a model has the potential to help ensure anyone who can safely donate blood should be able to, so the NHS has access to the safe supply of blood it needs.”

“Thousands of people could benefit from the blood of potential MSM donors, who are currently restricted from donating.

“More than 3,400 gay and bisexual men signed the digital pledge to say they would donate if they could. With each blood donation having the potential to save three lives, that’s over 10,000 lives that could have potentially been saved.”

“The last time I tried to give blood was the time I was told I couldn’t because I’m a sexually active gay man. I hope this campaign makes a change that benefits the whole population and helps ensure people get the blood they need.”