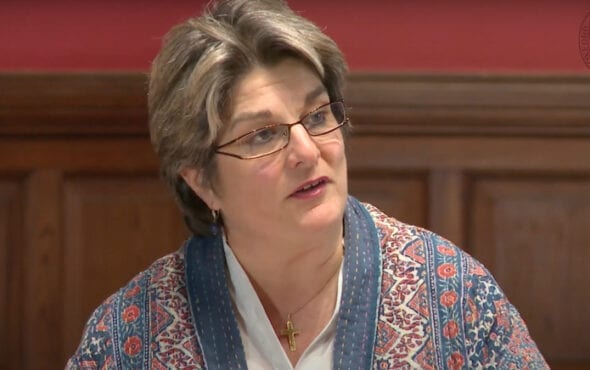 Jayne Ozanne, the UK government’s leading equality advisor, has resigned from her role.

In an interview with ITV News, Ozanne revealed that she’s quit in protest and accused ministers of being “ignorant” about issues that affect the LGBTQ+ community.

Ozanne, a key member of the government’s LGBT+ Advisory Panel and a prominent gay evangelical Christian, told UK Editor Paul Brand: “I’ve been increasingly concerned about what is seen to be a hostile environment for LGBT people among this administration.

Ozanne said her resignation was due to a debate in Parliament on Monday, where 20 MPs discussed an online petition advocating for the ban of conversion ‘therapy’ in the UK.

The practice – which has been discredited by the NHS and the World Psychiatric Association – refers to any attempt at changing a person’s sexual orientation or gender identity, and often involves techniques such as electroshock therapy or prayer.

In 2019, the UK’s then-prime minister Theresa May said it was the government’s priority to “end the practice of conversion therapy” as part of their 75-point plan to improve the lives of LGBTQ+ people across the country. So far, there’s been zero progress.

Speaking at a school visit in Kent last year, Boris Johnson described gay conversion ‘therapy’ as “absolutely abhorrent” and said it has “no place in a civilised society, and has no place in this country.”

Despite their pledge to abolish the practice, LGBTQ+ activists are doubtful that a ban will ever be implemented. During Monday’s debate, Equalities Minister Kemi Badenoch told MPs that she wanted to “end” conversion ‘therapy’, but avoided using the word “ban”.

In her interview with ITV, Ozanne hit out at Badenoch, as well as her boss and cabinet member Liz Truss, saying they’re known within the community as the ‘ministers for inequality’.

“I don’t believe that they understand LGBT people, particularly trans people,” she explained. “I’ve sat in meetings and I’ve been astonished about how ignorant they are on issues that affect the real lives, particularly of younger people.”

She further told Brand that she thinks the UK government is actually going backwards on LGBTQ+ equality, “back to the days” of Margaret Thatcher.

“The language that I hear from them is of us being woke, or of being loud lobby groups, and what they don’t seem to understand is the reason we have to shout is because we are hurting, because there are people who are vulnerable who are going unheard and unnoticed,” she said.

“I do not believe this Tory government, sadly, have the best wishes of the LGBT community at heart. Instead we seem to have a Trumpesque mode of operation where they’re listening to the right-wing evangelicals and those frankly who want to take us back.”

The full interview will air in the UK at 6.30pm on Evening News.