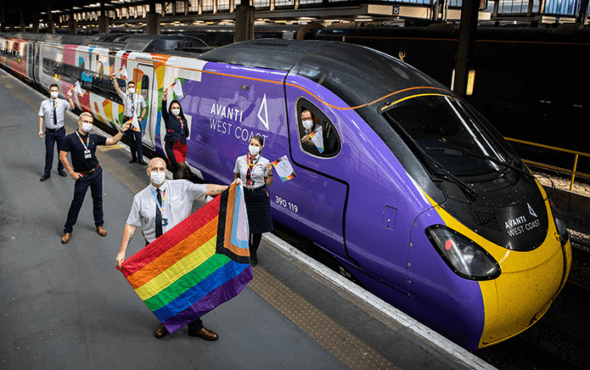 Avanti West Coast has set off its first Pride train decorated with a colourful paint job across 11 carriages. The train is due to travel from London Euston to Manchester Piccadilly on 25 August.

As a symbol of solidarity with the LGBTQ+ community, Avanti West Coast has wrapped a collection of carriages with the flag and the word “pride”.

The train company have opted for an adapted version of the traditional flag to reflect inclusivity and diversity.

Alongside the original flag, black, brown and blue, pink and white stripes have been added. These additional colours represent people of colour and the transgender community.

“Our new Avanti West Coast Pride Train represents everyone in the LGBTQ+ community,” she said. “It is a symbol of our commitment to diversity and inclusion as it travels up and down the West Coast Main Line. We Live Proud 365 days a year, not just today.”

The interior of the train will feature LGBTQ+ themed posters, literature and information for passengers to engage with.

Train manager Paul Austin is happy to see LGBTQ+ visibility in the industry.

“This is about being accepted for who I am and representing the LGBT+ community we serve across our network,” he said.

“Being a part of the UK’s first all-LGBT+ crew is a sign of the steps we are taking towards a more inclusive, diverse and equal society and I am so proud to be involved today.”

Our Pride train has just departed for its first official journey from London Euston to Manchester Piccadilly. The train is serviced by our full LGBTQ+ crew, creating not just a Pride train, but a Pride experience 🌈 #LiveProudhttps://t.co/q0gpxeoTcT pic.twitter.com/m1tZTQ4wG6