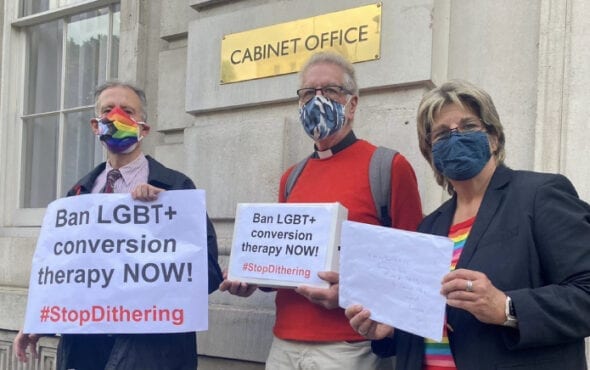 Core Issues Trust, a charity based in Northern Ireland, provides a service called “talking therapy” for those wishing to “explore moving away from unwanted same-sex attraction and gender confusion”.

VICE World News reports that after “years” of trying to meet with the government, they finally succeeded in doing so.

After being in contact with equalities minister Kemi Badenoch, who was previously heard misgendering transgender people and questioning gay marriage in leaked audio, the group got an invitation to a meeting.

Core Issues Trust told VICE World News that it was “productive” and that they recently sent all UK MPs a new book featuring stories from “former homosexuals”.

A spokesperson for the Equality Hub, which works with the Equalities Office and other government departments, told GAY TIMES: “The Government’s values do not align with those of the Core Issues Trust. We believe that conversion therapy is an abhorrent practice and will shortly publish our plans to ban it in this country.”

Despite this, leaked emails from July 2021 suggest that officials were interested in hearing what the group had to say and even ended up meeting with 10 “former LGBT people”.

“Unsure of your availability within the next week or so, but we’re happy to work around your schedule as much as possible. Please see below for some suggested times next week.”

According to representatives from Core Issues Trust, those present in the July meeting “listened respectfully” and even “encouraged” those claiming to no longer be LGBTQ+ to get involved in its consultation on the practice.

They added: “We’ve asked for meetings before and never been given anything. So, you know, this was a step in the right direction.

“It was just officials from the equalities office. It was a brief meeting. I think it was just over half an hour, maybe 40 minutes in total.

The UK government first committed to banning conversion therapy in 2018 under Theresa May, though this is yet to happen and many forms of it remain legal.

Under recently announced plans, current conversion therapy methods avaialble would only be banned for those under the age of 18 and for those not actively looking for it – meaning Core Issues Trust would be able to keep operating.