U.S. ice dancer Karina Manta comes out as bisexual and introduces world to her girlfriend 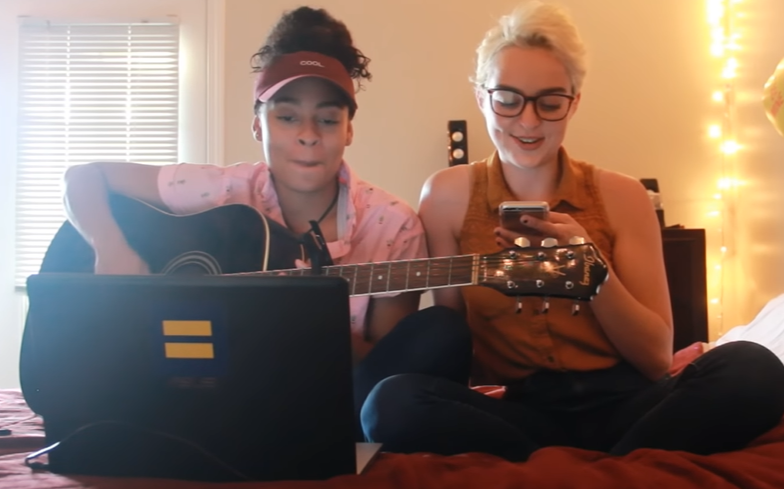 The professional skater had previously hinted at her sexuality with a Pride flag.

U.S. ice dancer Karina Manta has officially come out as bisexual, in a video she uploaded with her girlfriend, Aleena. In the video, both Karina and Aleena are sat on a bed, while Karina speaks and Aleena plays the guitar, and sings when Karina falls silent.

In the video, Karina thanked Aleena for her support, and revealed that they had been in a relationship for a year, even though their love had been made “a shadow” as Karina was not yet out. “Thank you for waiting through every conversation that I’ve referred to you as my best friend,” Karina said.

Karina also opened up about “dragging” Aleena “back into the closet” and compared her time in there as being in a “prison cell”. She continued, saying: “There’s no pretty way to say that I’ve made myself sick living my life this afraid.

“I’ve spent the past year as two different people, bags under each of their eyes for different reasons. Neither side of the pillow feels safe. I grow more exhausted every day.

“I am itching to shed my skin. I have long outgrown the cocoon.”

She later added: “Today I am waking with the biggest yawn, stretching my limbs and saying, ‘I’m Karina, it’s nice to meet you after so long.'”

Continuing, Karina said: “At the end of the day secrets have only made me sad. I’m finally more scared of living this way forever than letting people know who I am.”

As well as uploading the video to YouTube, Karina also posted it on her social media accounts. Captioning the video on Instagram, she wrote: “I’ve been trying to figure out how to create this post for a long time. I’m still not sure that I have the right words..but I think that maybe I need to let go of trying to make everyone understand and just start with being honest.

“So this is me at my most honest. And my most vulnerable. And my most scared.  I’m hoping this will leave me feeling my most free too.”

She finished the post with an emoji of two girls holding hands, and a rainbow. She also gave it the hashtags, “pride” and “bipeoplearereal.”

Speaking to Outsports after releasing the video, Manta said: “I’m really grateful for all the people who have reached out in support.

“It’s been a little overwhelming. I’m adjusting to having more attention directed toward something I’ve kept fairly private for some time.”

You can watch Karina and Aleena’s video below.