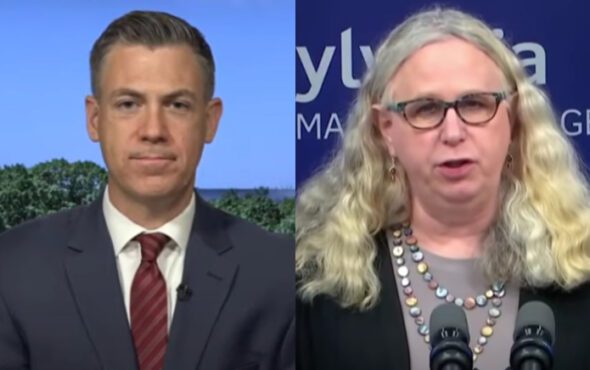 Levine recently made history as America’s first-ever out transgender four-star admiral in any of the country’s eight uniformed services.

She will now serve as the highest-ranking official in the US Public Health Service (USPHS) Commissioned Corps.

The role will see the 63-year-old lead 6,000 Public Health Service officers after being appointed by President Joe Biden.

During a swearing-in speech on 19 October, Dr. Levine said she hopes her “momentous” appointment will pave the way for a “more inclusive future.”

“May this appointment today be the first of many more to come, as we create a diverse and more inclusive future,” she added.

Banks, the US Representative for Indiana’s 3rd congressional district, took to social media to respond to the news and referred to Levine as a “man.”

After locking his account on 23 October, the social media giant said he could only have it back once the tweet is deleted.

Banks took to his personal profile to declare that he was unfairly punished for “posting a statement of FACT”.

“I won’t back down,” he writes. “I’ll be posting on my personal account for the time being.”

In March 2021, Levine was confirmed as US assistant secretary for health in a 52-48 Senate vote.

Her new position as assistant secretary of health at the Department of Health will see her run the Health and Human Services offices and programmes nationwide.

He said Levine will help bring “the steady leadership and essential expertise we need to get people through this pandemic – no matter their zip code, race, religion, sexual orientation, gender identity or disability.”