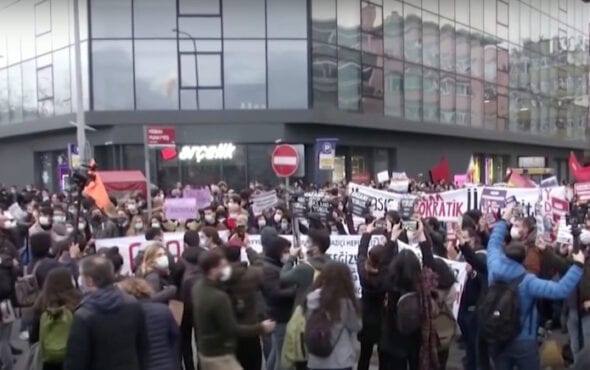 Amid a wave of intense student rallies, the politician slammed the LGBTQ+ movement as incompatible with the country’s values and compared protestors to “terrorists”.

Over the past week, more than 300 students were apprehended in Istanbul and Turkish capital Ankara following increasingly volatile and politically-charged altercations with authorities.

The protests came to fruition after Erdoğan named Turkish academic and politician Melih Bulu, who has strong ties to the ruling AKP (Justice and Development Party), as a rector of Boğaziçi University.

Following the announcement, hundreds of protestors chanted “Melih Bulu is not our rector” and “we don’t want a plagiarist rector,” while staff called his appointment a violation of “academic freedom and scientific autonomy.”

The protests – which began 4 January – have continued to gain momentum, with many students from Turkish universities and Boğaziçi alumni associations joining the rallies and condemning Bulu, as well as Erdoğan.

During one demonstration, four students were detained over a piece of artwork that depicted the Kaaba, which is considered the most sacred site in Islam, alongside an LGBTQ+ flag.

Süleyman Soylu, the Turkish Ministry of Interior, was slammed by mainstream media and LGBTQ+ activists after referring to the students as “four LGBT perverts” in a tweet, which was later restricted by Twitter.

“Are you students or terrorists who dare to raid the room of the rector?” Erdogan also said in a televised video addressing the protestors. “This country will not be a place where terrorists prevail. We will never allow this.”

Although the protests weren’t specifically spearheaded by LGBTQ+ people, the artwork has resulted in continuous political attacks against the community from some of Turkey’s top officials, including the president.

In another video broadcast to the AKP, Erdogan doubled down on his homophobic views, stating: “We will carry our young people to the future, not as the LGBT youth, but as the youth that existed in our nation’s glorious past.

“You are not the LGBT youth, not the youth who commit acts of vandalism. On the contrary, you are the ones who repair broken hearts.”

Later, he denounced the existence of the entire community, saying: “The LGBT, there is no such thing. This country is moral, and it will walk to the future with these values.”

Speaking with Habertürk, Bulu said that he “never” thinks about resigning and predicts that this “crisis” will be over within the next six months.

He also pledged his allegiance to the LGBTQ+ community, telling the publication: “There is no approach of targeting the LGBT identity here, Boğaziçi is respectful to every identity. I have never reacted against LGBT individuals.

“I am a person who defends the rights and freedoms of LGBT individuals. You know, there is a 2-year monitoring period. The LGBT was a candidate club, it was not a club yet.”