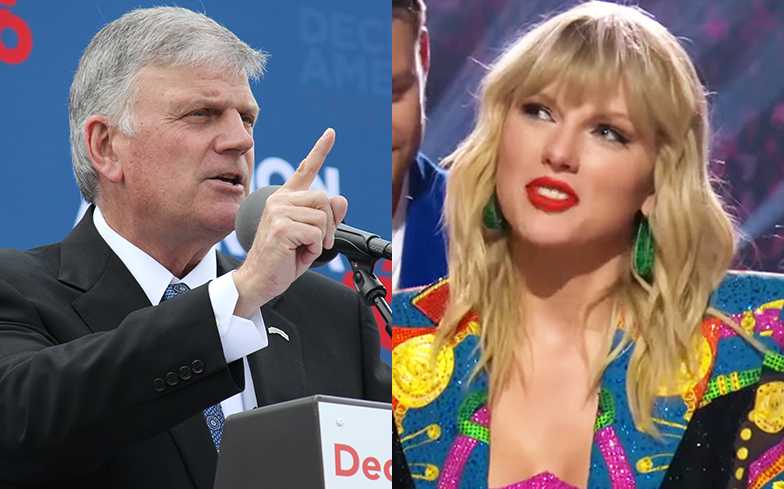 The evangelical pastor, who preached at Donald Trump’s inauguration in 2017, hit out at the American singer-songwriter after she called on the White House to pass a bill that would make LGBTQ people equal under law.

“Shame on Taylor Swift for using her platform to try to push the socialist left’s so-called Equality Act, which has nothing to do with equality, but is about pushing the LGBTQ agenda down the throats of the American people,” Graham wrote on Facebook.

“When she received an award for her LGBTQ pride-themed music video at the MTV awards last night, she did a pitch for the Equality Act. This bill is the most crushing threat to religious liberty in our nation’s history.

“In addition to allowing perverted men access to women’s private spaces like dressing rooms and restrooms, and allowing biological males to take over girls’ and women’s athletic competitions, this bill would do a lot more damage.

“It’s about trying to force those of us who don’t agree to accept and approve the LGBTQ lifestyle, and I’m not going to accept that.”

Swift took home the Video Of The Year award at this year’s MTV VMAs for her You Need to Calm Down clip, which featured a host of queer icons and ended with the star urging fans to sign her petition for Senate support of the Equality Act.

When she took to the stage to accept her award, she seized the opportunity to call out the Trump administration’s lack of care for the LGBTQ community by stating: “The Equality Act basically just says that we deserve equal rights under the law.

“It now has half a million signatures, which is five times the amount it would need to warrant a response from the White House.”

“However, the House-passed bill in its current form is filled with poison pills that threaten to undermine parental and conscience rights.”

You can still sign Taylor’s petition which has over 500,000 signatures here.