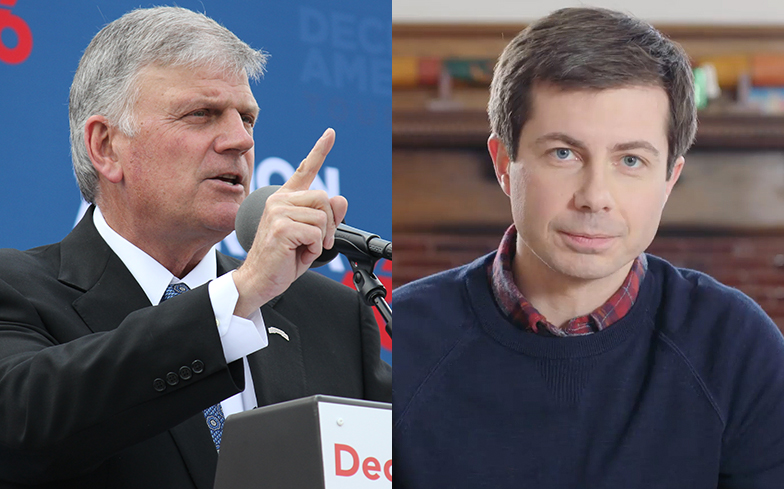 Buttigieg, a Navy veteran who’s currently serving as mayor of the town of South Bend in Indiana, is a Democratic candidate for the US presidential election in 2020, and if elected, will become the first openly gay president of the United States of America.

While he’s received support from a number of high-profile names including Ryan Reynolds and Ellen DeGeneres, one person who’s not a fan is Franklin Graham, an American evangelical preacher who spoke at Donald Trump’s inauguration in 2017.

“Mayor Buttigieg says he is a gay Christian and he wants to unite people behind him. I’m sure there will be many people who will want to follow. But as a Christian I believe what the Bible says,” Graham wrote in a Facebook post dated Tuesday 23 April.

“God’s Word defines homosexuality as sin, something to be repentant of, not something to be flaunted, praised, or politicized. The Bible defines marriage as between a man and a woman – not two men, not two women.”

Throughout his campaign so far, Buttigieg has spoken proudly and openly about being a gay man, and has brought his husband Chasten Glezman (who he met on a dating app) along for the journey. Clearly not a fan of this approach, Graham continued: “Mayor Buttigieg also said that to him, ‘the core of faith is regard for one another.’ We are definitely to support and help each other – no question.

“But that does not come above believing and being obedient to what God says is truth. Without that foundation, we really can’t help anyone in a way that impacts their eternity.

Graham’s comments come after Buttigieg spoke about the crossover between his faith and sexuality during a CNN town hall in New Hampshire on Monday 22 April, where he argued that he could unite people from all parties and beliefs.

“It can be challenging to be a person of faith who’s also part of the LGBTQ community and yet, to me, the core of faith is regard for one another,” he said.

“And part of God’s love is experienced, according to my faith tradition, in the way that we support one another and, in particular, support the least among us.

“I get that one of the things about Scripture is different people see different things in it, but, at the very least we should be able to establish that God does not have a political party.”