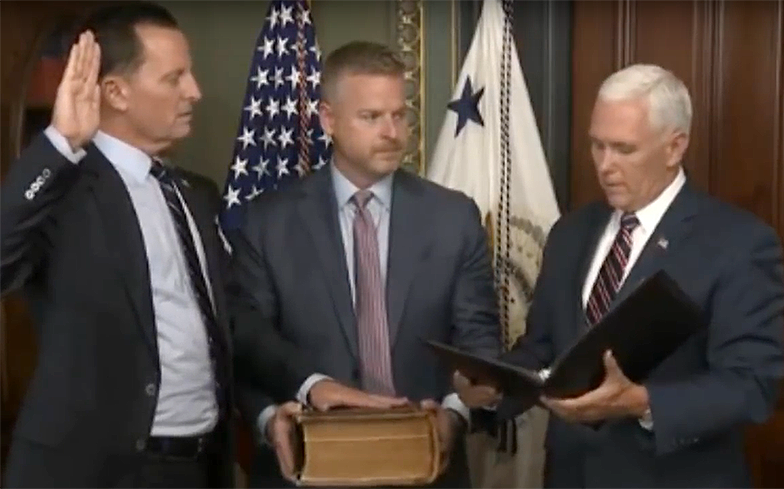 Richard Grenell, Tr*mp’s ambassador to Germany, has told fellow gay conservative Dave Rubin that being gay has made him a better Christian. Grenell is the first openly gay man to sit at Cabinet level with his role as Acting Director of National Intelligence.

Speaking on The Rubin Report, he said: “I was made this way. I was born gay.

“So the fact of the matter is I fully embrace that I was made this way in the image of God and you can be gay and be a Christian. And there’s no problem with it.”

He added: “When I had cancer and I was really kind of down in terms of my physical outlook, I felt like I prayed more and I was closer to God because I was in need.

“I feel guilty about that as I go through life and, of course, the ups and downs of life, when things are going well you don’t pray as much.

“I think I get so much challenge that you can’t be gay and be a Christian that it makes me a better Christian.

“I am an imperfect follower of Christ. I fail every single day. But for me what’s the beauty of this is that the Bible talks about having new mercies every morning and grace every morning.”

However, elsewhere in the interview, Grenell criticised liberal LGBTQ activists, claiming that they don’t want to get involved in the fight for LGBTQ rights across the world. He further claimed they don’t want equality, but instead want to “jump up and down” and be celebrated and that LGBTQ people need to agree to disagree with their opponents.

Last year, Dave Rubin agreed with Tucker Carlson that the Californian wildfires were down to utility companies being too focused on having a diverse workforce.

Speaking about the wildfires on Tucker Carlson Tonight, Carlson said: “PG&E strikes me as almost a metaphor for the destruction of the state.

“Here’s the utility which doesn’t really know anything about its own infrastructure but knows everything about the race of its employees. How did we get there?”

Rubin chimed in with agreement, saying: “The problem right now is that everything, everything, from academia to public utilities to politics, everything that goes woke, that buys into this ridiculous progressive ideology that cares about what contractors are LGBT or how many black firemen we have or white this or Asian that, everything that goes that road eventually breaks down.”