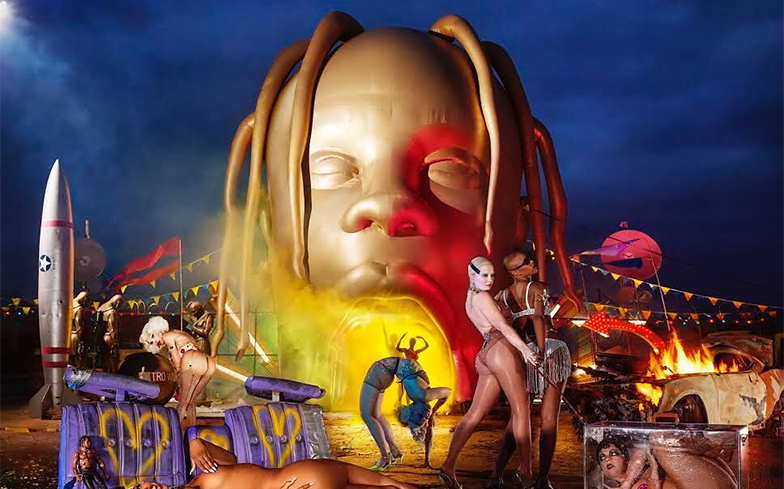 The rapper and producer’s new album, Astroworld, may have only just been released, but it’s already making headlines – although not exactly for the right reasons.

In the alternative cover art for the album, which was first shared by famed photographer David LaChapelle on Instagram, Amanda appears alongside a number of highly-sexualised female models in a carnival setting.

But when the artwork was shared on Travis’ own Instagram account, Amanda had been erased from the image, while everyone else remained.

“It was great being part of David LaChapelle’s incredible photograph of Travis Scott’s album cover but I’m curious why I’m not on the picture Travis Scott posted,” Amanda wrote on her Instagram account.

Amanda’s omission from the final cover artwork has sparked backlash among the LGBTQ community, including from RuPaul’s Drag Race winner Aquaria, who called it the “mysterious case of the disappearing Amanda” on Twitter.

The mysterious case of the disappearing Amanda…. hmmm @trvisXX 🙄 pic.twitter.com/COflbfoHVH

Drag queen BibleGirl labelled Travis “trans-exclusionary” and criticised photographer David for not ensuring Amanda was kept in the photo.

“It’s unfortunate you couldn’t take a creative stand on maintaining Amanda’s presence for this project. An insult to her legacy,” she wrote.

While Travis has yet to respond to the backlash, photographer David has tried to defuse the situation in comments left on Instagram, telling fans that Amanda simply “upstaged” everyone and that it has “nothing” to do with transphobia.

“Amanda was taken out because she just upstaged everyone lol she is in my books and heart and she knows the T,” he wrote.

“Everybody wants to explain everything with some phobia or whatever this is just a case of something else she can’t just can’t seem to control lol ain’t nothing to do with hating.”