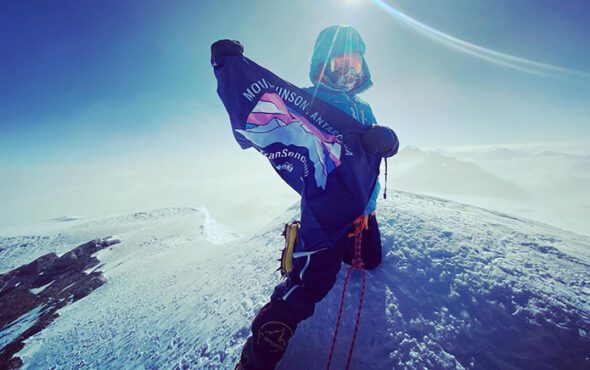 A mountaineer waved and planted the transgender Pride flag at the peak of the highest mountain in Antarctica.

On 26 December, Erin Parisi reached the summit of Vinson Massif which is 16,067 feet above sea level.

After coming out as transgender in 2016, she decided she wanted to climb the highest peaks on each of the seven continents and become the first openly trans woman to do so.

“I felt so strong after coming out,” she told NBC News. “I lived in fear, basically my whole life, of being seen, and when I came out, I found something that was completely different.”

To celebrate her climbing achievement, Parisi waved the Pride flag and planted it in dedication to the trans community.

“I’m dedicating this to the resilience of the trans community – The community that took me in when I had no hope, and showed me that it’s better to be visible and free, than live in self imposed exile, and that stigma withers when we visibly embrace our truth,” Parisi wrote on Instagram alongside a picture of her with the flag.

She plants the trans Pride flag at the peak of each of her climbs as a tribute to her community.

Parisi’s Instagram post continued: “We’ve been pushed down, often even beat up, and faced every kind of coldness through our lives – our resilience keeps us rising to the top.

“Together we forged thru a 2021 during which the world tried to deny us dignity in healthcare, the right to hold jobs, the right to play sports, perpetuated stigma through comedians and podcasters on the world’s most popular channels, and continued escalating the voices of violence against us.

“We fought back in a way that shouldn’t have to be a fight: by living our best lives.”

Parisi has now climbed five of the seven highest peaks on each continent, bringing her one huge step closer to her goal.

She will now begin training to climb the world’s highest summit, Mount Everest, and Denali in Alaska – the highest peak in North America.

When she climbs Mount Everest, Parisi wants to celebrate the life of trans author Jan Morris.

You can donate to Erin Parisi’s 7 Summits GoFundMe page by clicking here.