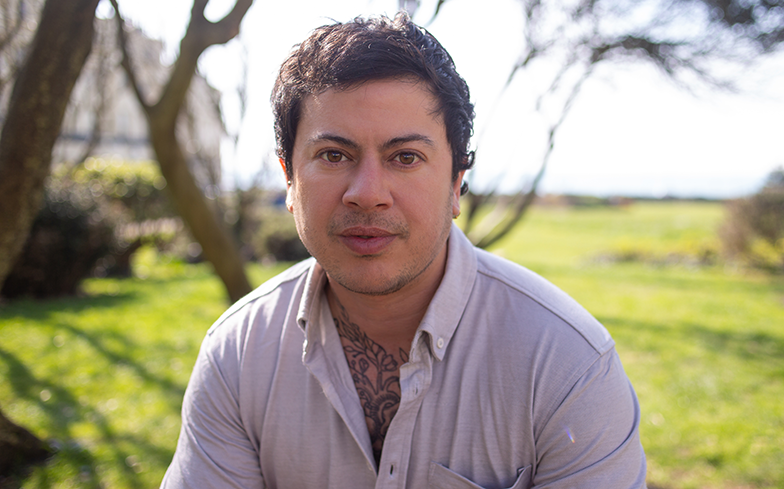 This day has become increasingly special for me – not only as a highlight but also as a time for reflection. I am not trans myself, but no one in our rainbow family can have missed the increasing hostility, both online and in soaring hate crime rates, faced by trans people in recent years.

Pride festivals are one way in which we can stand in solidarity against homophobia, biphobia and transphobia. Sadly many of these have fallen victim to the COVID-19 crisis, including an event where I was due to give a speech on why being a trans ally is integral to my identity as an LGBTQ individual and campaigner.

It is in this spirit that I was delighted to chat to Fox Fisher, who is at the forefront of the LGBTQ movement in the UK. Fox is a non-binary trans author, artist and activist, as well as a patron of Switchboard – the LGBTQ helpline – and a trustee of Trans Pride Brighton.

For Transgender Day of Visibility they “will be releasing a music video, via My Genderation called Sorry, Out Of Gender. It’s a collaboration with the super talented musician and content creator Shonalika and this film was created by an entirely non-binary trans cast and crew. It’s a catchy track, which I still tap my foot to, even after all the filming and editing – which is a really good sign! You can watch it on our My Genderation YouTube here.”

Fox is known for many campaigning achievements, but said, “The campaign I’m most proud of has to be the hashtag #ThisIsWhatNonBinaryLooksLike which, went viral on Twitter. The timing was perfect, just after my partner and I had a 15 minute interview defending our right to exist, with an increasingly absurd Piers Morgan. I felt frustrated with the way things had gone, and although Piers didn’t get a rise out of us, I had wanted to show that being non-binary is a gender identity, and just how different our gender expression can be. Therefore, firing out a tweet and the hashtag going viral felt powerful, like a vast wave of people saying, ‘I’m non-binary, I exist and I’m not going away.’ We documented this in our feature film I Am They.

Fox is remaining optimistic in the face of COVID-19 – optimism is what we all need right now! It is an opportunity to “press pause… to focus on… health and play catch-up.” Fox reflects that there is an organic unifying aspect to the pandemic. And I definitely agree that it is healthy to examine both sides of this crisis, including its potential to positively reshape our lives and even society. Like me, Fox regrets the loss of Pride festivals:

“As a co-founder of Trans Pride in Brighton I know how much it will mean to thousands of trans people and their allies to not be able to attend something so heartfelt. Trans Pride is the kind of uplifting event that myself and many in the community feast off of for the rest of the year, during darker days. When the mainstream media regularly paints trans people as a threat, mentally unstable or a deviant, the reason we created events like Trans Pride or films via My Genderation is to provide people a space to be themselves and to celebrate our differences.”

In terms of supporting trans people now, Fox emphasises that, “Thankfully, a lot of support can be given online via donations, sharing of films and articles and purchasing t-shirts and art. Also, reaching out to older or more isolated people can really save lives. It’s the people who don’t have support online that I worry about.”

Looking beyond COVID-19, Fox is working on a number of projects:

“For the next year, apart from staying healthy and hanging with my hound Soldier Blue, I’m excited to develop more stories. Some scripts I’m working on are based on true stories, involving LGBTQ people. I’m writing a series based in 1974, about a group of trans people who take a road trip to see a doctor in Scotland. It’s a truly special adventure, involving hope, love and laughter during an extremely difficult time to be trans or queer.”

Fox’s wise words are both insightful and reassuring. We can all still do our bit to support trans people, the LGBTQ community and society in general. The challenges that 2020 brings will be, in many ways, different to those we have faced before. Let us take inspiration from Fox’s work and always remember that trans rights are human rights.